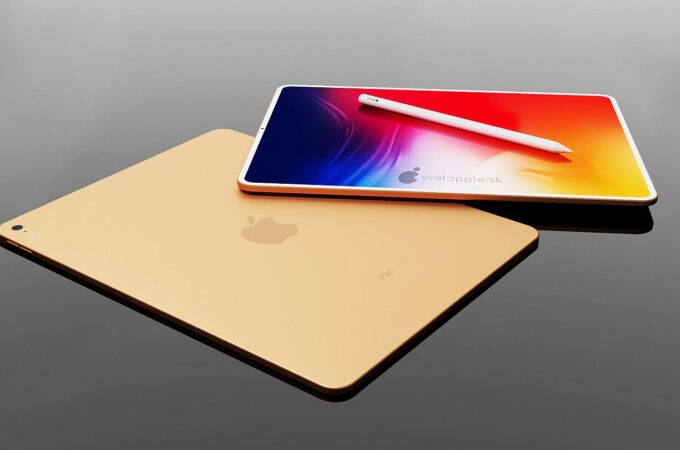 After multiple renders of iPhone, today we show you some fresh iPad renders, which feature very narrow bezels. Courtesy of Svetapple.sk, we’ve come across some iPad Air 2020 renders, that feature in display touch ID sensors. We have more details below.

The device is portrayed with a very slim body and an Apple Pencil in the mix. It seems like a pretty large slate, close to an iPad Pro 12.9 inch almost and it could be made of metal. It could even end up being as slim as the Galaxy Tab S5e (5.55 mm) and I see the iPad Air 2020 sports a single back camera, plus a discretely integrated front camera. No trace of Face ID, punch hole, notch or other crazy traits. From what I can see the Touch ID is integrated and applied anywhere on the screen, a technology we’ve heard of before.

It may be transplanted to the iPhone 12 before the year is out. The device has slightly rounded corners and the source of the renders talks about an 11 inch diagonal in the same footprint as a the current 10.5 inch iPad. We can’t tell if Apple will go with an OLED or LCD this time around, but LCD sounds like a pretty safe bet and should keep the product cheaper. While quad speakers would be nice, they’re probably also not available here, once again to keep the price low and avoid excessive vibrations of the slim case.

No LiDAR scanner here and specs-wise, we should get an Apple A12X Bionic CPU and 4 GB of RAM. A price of 599 euros is estimated for the basic model with 64 GB of storage. Expect a Fall 2020 release, if Apple does have a new iPad Air planned…