Over the past years there has been an impressive number of rumors saying that Apple will release a television set, but we’ve only seen the Apple TV set top box coming to life so far. The folks of Appledigger.ru have decided to come up with a concept of the Apple iTV, that’s shown in the pictures and video below. 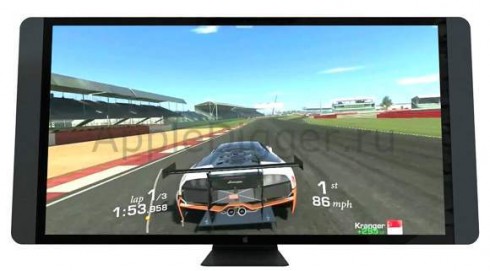 There’s no liquid plasma, no transparent screens, only existing technologies. The inspiration for the iTV is the 2012 iMac, the latest generation available, as well as the iPhone 5, plus the Apple TV. The case uses anodized aluminum, the TV is painted black and it’s only available in this color choice. It’s supposed to have 3 versions with different displays: 30 inches, 41 inches and 50 inches. Incorporated into the device we find a FaceTime HD camera for videocalls and at the top there’s a dual stereo microphone.

On the back we’ve got an audio jack, Ethernet, Thunderbolt, 4 USB 3.0 ports and under the glass logo there’s a WiFi antenna. At the ends of the Apple iTV here are two sets of holes, used to disperse heat, that’s known to rise. The device can connect via wireless to the iPhone, iPad or iPod Touch, which you can use as controllers for it. There’s also support for Bluetooth connections to third party joysticks for gaming. The video below makes me think that this Apple television looks a bit like a modern iPad, for some reason…