Since the iPhone 6 is already in the rumors, why not discuss the iPad 5 a bit? Japanese blog Macotakara, famous for being close to supply chain sources is saying that the iPad 5 design will borrow from the iPad Mini’s looks. Sources expect the slate to be 4 mm shorter, 2 mm thinner and 17 mm narrower, so we’ll be dealing with thinner side bezels, just like on the iPad Mini. 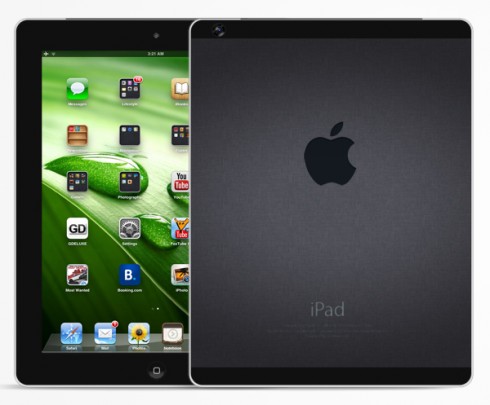 Reports are saying that Apple is accelerating the release cycle to respond to products like the Nexus 7 and the Surface Tablet, although the latter is not that much of a threat. The same rumors talk about an iPad Mini 2 with Retina Display, saying that device will have a 7.9 inch 2,048 x 1,536 display and an Apple A6X chip. The iPad 5 prototype shown here is a lighter iPad 4, with the same potent CPU, same screen, but different design, especially when it comes to bezels.

Rumors say that we should expect either iPad 5 or iPad Mini 2 to drop in March and I think a dual launch wouldn’t surprise anyone. We may even see a camera upgrade, especially the front one, since the back one is decent and I’m not sure Apple is ready to jump to the A7 CPU in this time frame… I’m also pretty sure that the iPad Mini 2 will have more RAM than the original Mini and if it keeps the excellent battery and maybe the price, it’s a brilliant product. Sadly, about the iPad 5 we don’t have much news, aside from the pics and prototypes.

[via gizmag and gdeluxe]