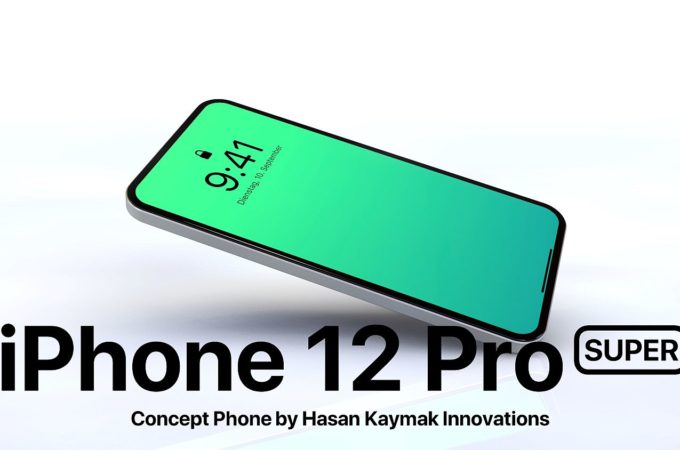 Hasan Kaymak sends us a render every month or so, but it’s highly detailed, with a gallery and a video to accompany it. This time he shows us a different take on the highest specced flagship of 2020 from Apple. It’s called the Apple iPhone 12 Pro Super.

First of all the asymmetry of the Galaxy S11 Plus back camera catches on. I see the iPhone 4 style metal frame is back and that aside from the current triple main camera there are also two extra sensors. I imagine there’s a Time of Flight one and a laser one or maybe a Low Light one. If you’ve got raised eyebrows about last one, a recent leak told us that Samsung is prepping a Bright Camera sensor for low light capture on the S11.

That may also appear on the iPhone 12 Pro Super. Don’t get me wrong, Apple is on the right path with its current Night Mode, but we need more control over it and also some hardware help. The device shown here looks great in green and it comes with a 6.7 inch screen, an USB-C port at the bottom and a crazy 108 megapixel camera. It also gets a Macro camera and 3D ToF sensor. The metallic green and light purple hues shown here totally blew my mind, since they are a departure from the current gradients and muted/frosted hues.

The notch is gone and the front camera is now placed below the screen (at last). We may actually get two 12 MP sensors below the screen, according to the subliminal messages of the video. Hasan Kaymak really hit this one out of the park this time, but Apple has NEVER chased megapixels, miliampers and RAM GBs, so I doubt they’ll jump to 108 megapixels just yet… Apple has always been about optimization and going with its own rare and quirky technologies.

About Kelvin
Passionate about design, especially smartphones, gadgets and tablets. Blogging on this site since 2008 and discovering prototypes and trends before bigshot companies sometimes
Samsung Galaxy S11 Plus Gets a Lot of Specs Right in This Final Design (Video)   Nokia Lumia is Back Baby and I’m Loving It