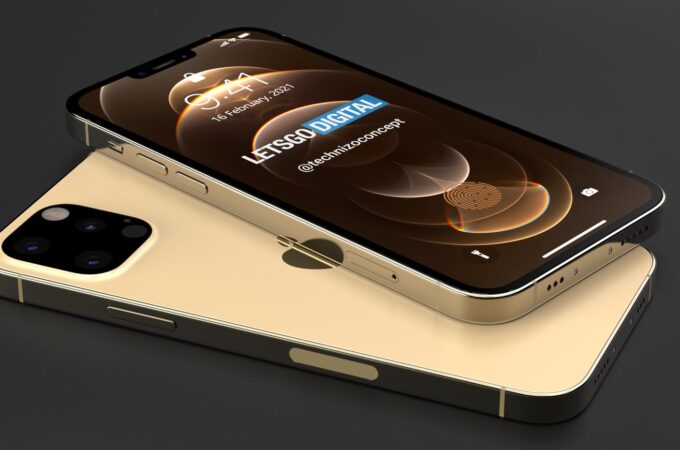 Apple launched 5 new iPhones in 2020 and there seems to be no sign of slowing down. 2021 will also bring us 5 or maybe even more Apple phones and the iPhone 13 leaks have been present in abundance. Today we get to see new renders of the iPhone 13 Pro, which propose a camera update and a new display.

Graphic designer Technizo Concept made them and Letsgodigital premiered them exclusively. Also known as the iPhone 12s Pro, this device has an under display Touch ID mechanism. The flat edges are here to stay, as is the square camera module and we also get a smaller notch upfront, at the top of the facade. It also seems that one of the iPhone 13 models will be portless and it won’t have a Lightning connector. Wireless charging and wireless everything will be the key here. Apple MagSafe will become the new norm for connections.

The iPhone 13 Pro made by Technizo Concept has a new 6.1 inch screen on board, which has been refreshed. We get Always On Display at last, already present on Android devices for a while now. Apple already put Always On Display on the Watch Series 5, so it could easily port it to phones. An upgraded refresh rate could be present, maybe 90 Hz or even 120 Hz. The problem is that it would kill the battery life. We expect a ProMotion screen with a 120 Hz adaptive refresh rate, meaning that it should drop as low as 10 Hz.

This means it’s a OLED panel with LTPO tech. LTPO display is more energy efficient than an LTPS variant. The Touch ID sensor is integrated under the screen and gone are the days of the Home button with fingerprint scanner. We could also see a combo of Face ID and Touch ID, working even faster together. A 5 nm Apple A15 Bionic CPU will be here, with renewed capacities like 5G and WiFi 6e. The LiDAR scanner is also expected to be upgraded, with even more accurate measurements.

Apple supposedly have a new type of battery in development, a softboard battery, which is smaller than the current standard. We also get a glimpse at a new Apple Watch Series 7, with a glucose meter, more sleep tracking features and improved pulse detection. More info can be found in the source below.

About Kelvin
Passionate about design, especially smartphones, gadgets and tablets. Blogging on this site since 2008 and discovering prototypes and trends before bigshot companies sometimes
Google Pixel 5a Rendered by @OnLeaks: Nothing New…   Samsung Glasses Lite Leak With AR Vision Functionality