As part of the ilounge iPhone concept contest, Ray Leal created the very original iPhone Omega concept phone, a device that comes with 16GB, 32GB or 64GB of memory and a 5 megapixel camera. Omega should “be available” in metallic red, gray or black and it uses a pretty interesting Cover Flow Contacts feature. 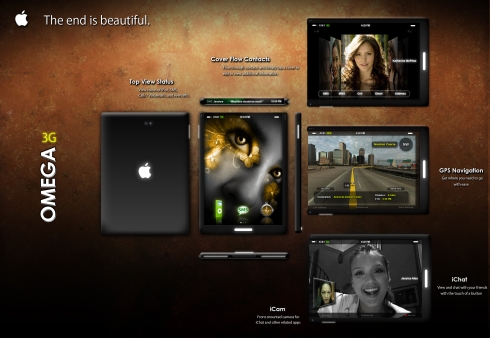 iCam and iChat are also supported,  just like we’ve seen on other iPhone concepts and there’s a GPS on board, plus push email (Gmail, Hotmail, Yahoo, AOL, .MAC), file storage support and even…. Adobe Flash (the blasphemy!!). What do you say? Would you buy such a device if it were real? How much would you spend on it?

About Thrystan
Sony Ericsson K890 Design, Looks Like a Spaceship, Interfaces like a HTC   LG Traveler Concept Phone, a Winner in My Book