Well, this concept MacBook Nano you can see below seems to be work of the fellows from Stuff magazine, also responsible for that beautiful PSP Phone I’ve shown you the other day. This may be a conceptual device, but I have two questions for you: what’s with all the hype surrounding it and why is the text around it written in Czech? 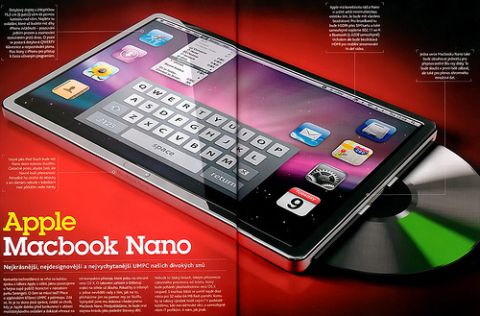 Everyone seems agitated after seeing the photo on Flickr, but why? Was it announced and I missed it? Is that DVD drive so important it’s worth dying for? Or is it the touchscreen and familiar UI making the word go out? I doubt that Apple can still squeeze an optical drive into such a small device and since they’re keen on flash memory anyway, there’ no reason to go back to such options.