We’ve already shown you some designs created by Suman Chatterjee and here’s one more! Meet the Flip smartphone, a device with a dual OS setup, created by this designer. It runs Android 4.2.2 and Windows Phone 8 and it relies on a flip icon on the dock bar to alternate between the platforms. 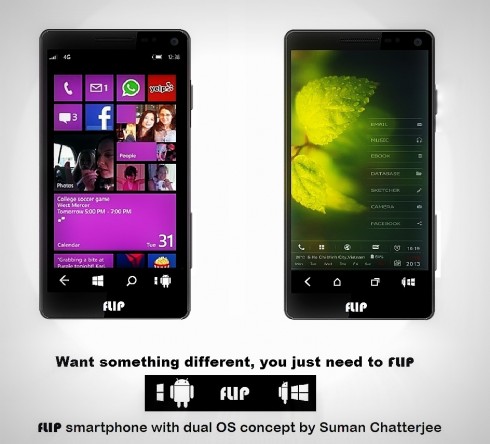 You can click the icon in order to change the OS and by the way, the platforms run simultaneously. Multiple users can be involved here, balancing work and personal stuff, depending on the user’s choice. The Flip smartphone packs a 4.9 inch HD display, a 5 megapixel camera at the front and an Ultrapixel camera at the back with dual LED flash and 1080p video capture. Inside the device, that I suspect to be made by HTC or Samsung for some reason, there’s an octa core 1.7 GHz processor, 4 GB of RAM and 32/64 GB of storage.

Bluetooth 4.0 is also here, plus 4G LTE, NFC and a removable Li-Ion 3500 mAh battery. This is a huge battery, even compared to the Droid RAZR MAXX, that got past the 3000 mAh mark a long while ago. I like the Android part of this design very much, especially the UI, while the WP 8 part is pretty much the usual one. Would such a model be a hit?