Rahul Sharma has imagined a bunch of interesting concept phones before and now he’s back with the Google Nexus 2013, pictured below. We’re dealing with a phone that runs Android Key Lime Pie on top of an AMD CPU. The design is curved and very thin and I actually like this form factor a lot. The handset gets a dual 2 megapixel camera at the front for 3D calls and many more interesting features detailed below. 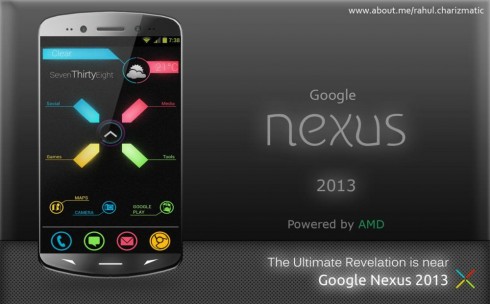 It also comes with Airplay, the ability to stream video on the screen from any device nearby, a Rfid sensor, that can “bring new possibilities to the phone” according to the designer and a Hibernate mod, for saving battery and keeping the current state of the device intact. It even has a chemical sensor, a cool feature that allows it to sense human emotions and facial signals, plus detection radiation levels, all of that through a nano mesh chip at the back.

Heat charging is available via the thermoelectric patch using nanotechnology and it allows it to charge the handset through body heat when held in hand or when exercising. Other features include a pressure sensor, an altimeter, magnetic sensor and 6 point multitouch, useful for games and graphics. There’s an illuminating back Nexus logo for notifications and if you want hardware details, know that the Google Nexus 2013 has a quad core AMD Piledriver 1.7 GHz processor, a Nvidia Tegra 4 GPU, a 4.9 inch 1600 x 840 p display and 2 GB of DDR3 RAM. Android 4.2 Key Lime Pie is the OS and at the back there’s a 21 megapixel camera with Carl Zeiss Varo Tessar technology and physical zoom.

I can’t think of any feature lacking from this phone… Even the capacitive buttons at the bottom are extremely cool and so is the Tron-like user interface.

About Thrystan
HTC One Z, the 5 HTC Phablet That Promises to Change the World (Video)   Nokia Lumia 3310 is Both the Phone of Chuck Norris and Thor’s Hammer