It happens very rarely that I encounter a smartphone that resembles a laptop so much. Looking at the back of the Intel concept phone below, I felt I was looking at either a MacBook’s back or a Surface tablet. 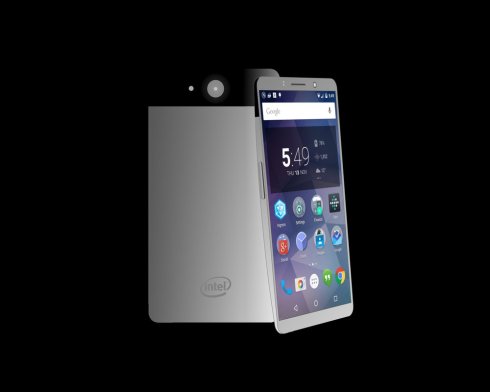 This model doesn’t have a name, but we do know it’s an Intel machine, with an Intel Atom CPU inside. It runs Android 5.0 Lollipop and packs 2 GB of RAM. Its chassis is stylish and relies on metal a lot. There’s a rounded back in the mix here and the back has a soft touch feel to it, at least in the camera area. By the way, the back cam is a 16 MP unit and it comes with a relatively flash LED flash.

The handset is slightly curved, but at the same time angular. It’s the creation of prolific Deviantart member jonaskvale, who also included a 5 MP selfie camera and a Quad HD screen at the front. Would this model sit right in the user’s hand?

About Kelvin
Passionate about design, especially smartphones, gadgets and tablets. Blogging on this site since 2008 and discovering prototypes and trends before bigshot companies sometimes
LG G4 2015 Render Gets Rid of the Bezels… For Good (Video)   Nokia Returns to Form With Android in Tow, in the Vision of Designer Chacko T Kalacherry