Micromax Canvas 4 Looks a Bit Like a Galaxy S

We’ve just received from Suman Chatterjee a new Micromax Canvas concept phone, another ideal handset for India. The device shown below follows the already rendered Micromax Canvas 3, that you’ve seen on this site quite a bit and brings Android Key Lime Pie in the mix and a new design. 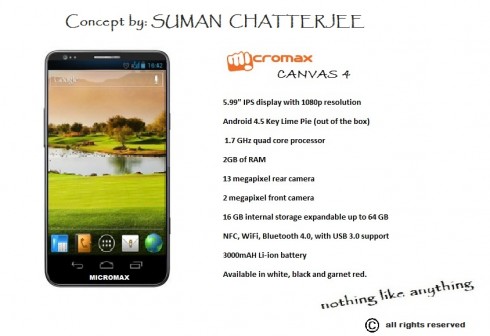 We’re dealing here with a 5.99 inch behemoth with an IPS display with 1080p resolution and running Android 4.5 Key Lime Pie out of the box. Inside the Micromax Canvas 4 there’s a 1.7 GHz quad core processor, 2 GB of RAM, 16 GB of storage, microSD card slot and a 3000 mAh Li-Ion battery. At the back there’s a 13 megapixel camera and upfront a 2 MP one.

Other specs include WiFi, NFC, Bluetooth 3.0, USB 3.0 support and the device should be available in black, white and garnet red. Sadly, the render is a bit blurry and badly drawn in the dock area of the screen, to be honest. With some corrections, this could become an interesting Micromax Canvas 4 concept.