Imagined by Optimal Design, the following concept phone looks like an Alienware laptop met an Autobot and made a child. The result is a handset that has side illumination, a pretty wide screen and some interesting angled physical buttons below the display. 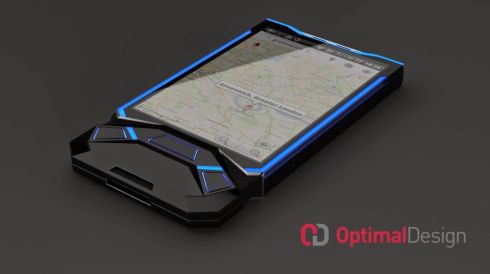 This is certainly a phone that would fit within the pockets of Optimus Prime. We’re dealing with something that’s certainly a metallic phone and frankly speaking, I’d see this as a flip phone for some reason. I’m sure that the lighting pattern and color from the sides and top can change and the same lighting is applied to the physical buttons. I can’t exactly tell why buttons are used on this unit and still there’s space left below them.

Also, the top of the screen, the status bar feels like it belongs in an older Android. At least, the handset is not bulky, as it may seem at first sight. If Alienware would make a phone, this would probably be it and this means they’d stuff some hardcore hardware inside. They’d include an Nvidia Tegra K1 64 bit unit probably, 4 GB of RAM and Android L. Fancy or just… too much?

About Kelvin
Passionate about design, especially smartphones, gadgets and tablets. Blogging on this site since 2008 and discovering prototypes and trends before bigshot companies sometimes
Windows 9 Flexible Smartphone Features a Beautiful Steampunk Allure   Bella Phone is One Pretty Phone Render, Created by Abhi Muktheeswarar