Puzzlecluster is a Brilliant Idea, Turns Dead Phones into a Super Computer

Sometimes a concept isn’t exactly defined by a physical gadget, but rather a conglomerate of moving parts. In the case of the Puzzlecluster, the modularity idea goes to a new level, as old phone parts gather together and make a supercomputer. 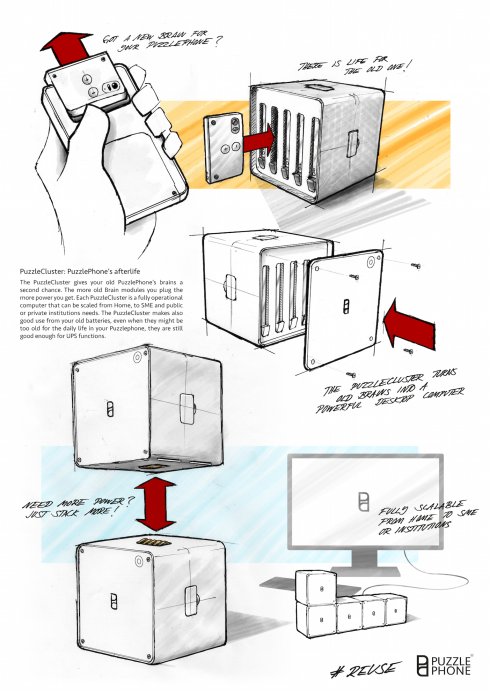 The company behind Puzzlephone has created something called Puzzlecluster, a scalable supercomputer. It all involves the old processor modules of the Puzzlephone devices, that are repurposed to make a toaster-like computer work, as shown in the diagram above. With so many different smartphone CPUs combined, the cluster will become a powerful PC. Imagine combining last year’s Snapdragon 801 with this year’s Snapdragon 810 something in the middle of next year.

I’m sure that will give any PC enough juice for many midrange tasks. The device even accepts battery modules from the Puzzlephone, in order to keep the device going. The product isn’t exactly meant for homes, since the Puzzlecluster is more of a research device, a data analysis PC, or a rendering farm, server or an in house cloud service product. We compared the initial unit to a toaster, but the final model could be sexier.

And to top it all, it will also be eco-friendly, reducing the waste.

About Kelvin
Passionate about design, especially smartphones, gadgets and tablets. Blogging on this site since 2008 and discovering prototypes and trends before bigshot companies sometimes
Microsoft Surface Lumia Phone Render is Subtle and Discrete   iPad Pro 12 Inch Tablet Rendered by Martin Hajek, Including an Apple Stylus in the Mix