Tired of all the operating systems flying around? Well, there’s a new one here, a concept called Mize OS, that has been created by Raflykurnia from Deviantart. This device is his first concept, so be gentle with the critique. 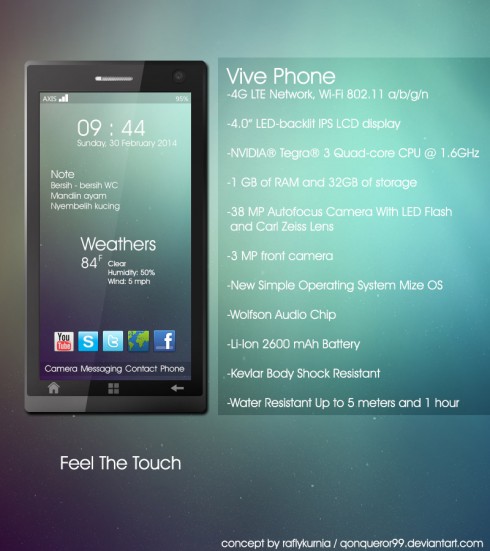 The phone render body is inspired greatly by HTC Touch Diamond and the handset comes with 4G LTE, WiFi, a 4 inch IPS LCD display with LED backlight and the Nvidia Tegra 3 quad core processor at 1.6 GHz as the brain. There’s also 1 GB of RAM, 32 GB of storage and a 38 megapixel autofocus camera with LED flash and Carl Zeiss lens. We’ve also got a 3 megapixel front camera and that new OS called Mize.

It’s supposed to be a very simple platform, one that seems to show the main social networking apps and the browser as tiny square shortcuts at the bottom of the screen. Everything is floating on the screen, without proper icons to hold them down, if I can say so. Other specs of this Vive  Phone include a Wolfson audio chip, a 2600 mAh battery and a Kevlar body that’s shock resistant and water resistant. What do you think of this phone design?