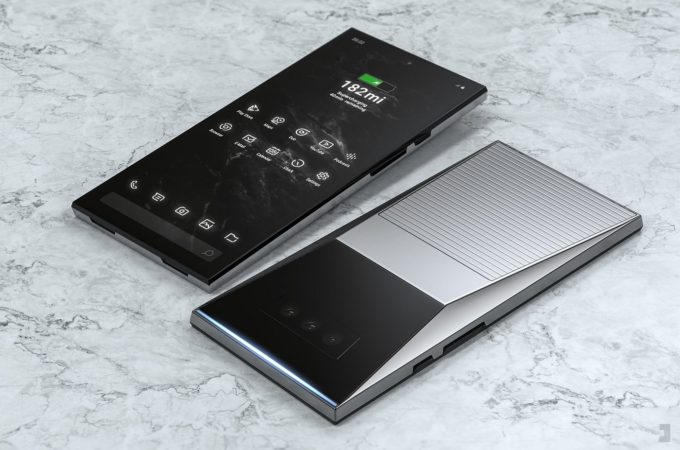 It’s very hard to figure out if there are more people who hate the Tesla Cybertruck, or more who love it. It’s viral anyway and Elon Musk already has hundreds of thousands of preorders for it. It was only a matter of time till designers starting mimicking the design and applying it to smartphones. Enter Phone Designer…

I’ve known Phone Designer aka Jonas Daehnert for years now, with some very solid Nokia designs and a Surface Phone or two. He also tackled some gaming gear, laptops and more. Now he created by Cyberphone, which is likely to polarize people as much as the Tesla pickup truck. Seem from the back and from the profile it does look like the Cybertruck a lot, but there’s also something very early Macintosh-ish about it.

The front side is rather generic, except for the interface which feels like a throwback to the LG Prada Phone 3.0. I see we also get a triple back camera, but no flash, so that’s weird. We may be dealing with one hidden in the black space around the lenses. The front camera is dead center like the Note 10 one and this beast is no less than 7 inches in diagonal. The result is beefy, massive, huge, probably also very heavy.

I’m not sure how user friendly the back is, since it looks like it would feel like a cheese grater on the palm. Angularity is also not very ergonomic. Still, Elon Musk would probably love it. I don’t, even if I’m a big fan of the designer.

About Kelvin
Passionate about design, especially smartphones, gadgets and tablets. Blogging on this site since 2008 and discovering prototypes and trends before bigshot companies sometimes
OnePlus 8 Lite Shows a Return to Midrange Segment, With Plenty of Camera   Pablo Escobar’s Brother Now Makes a Foldable Phone, With a Very Low Price