You probably know that every once in a while we like to cover the occasional PSP 2 concept or PlayStation Phone, but it’s been a while since the last concept like this was published here. Luckily we came across Jung Ou Yang’s work and he created a brilliant Sony PSP 2 render, that you can see below, in full detail. Stunning, simply stunning! 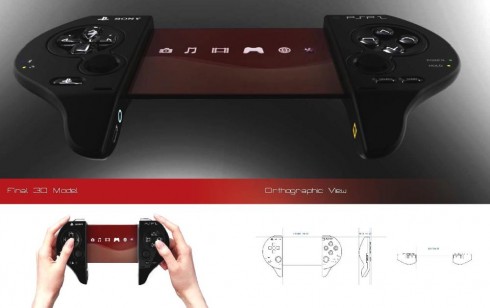 I’ve seen this idea before and loved it every time: two solid parts and a small and thin display between then, perhaps even a flexible display, although I can’t guarantee that. The Sony PSP 2 features Bluetooth, WiFi, 3G, a front and rear camera, plus a transparent OLED screen that’s probably 5 inches in diagonal. The device is very easy to hold with two hands and very easy to handle. It feels more like a bigger joystick, than a full fledged console, which is cool.

I should also mention that the concept dates from back in 2009, according to the designer, making it even more interesting. The general layout of the D pad, analog sticks and action buttons is pretty much the same as the one we already know, but everything is just… more futuristic and minimalistic. I like how the designer included the charging port on the right inner side and the audio jack and mini USB port on the left inner side. This is certainly a console I’d buy and the shoulder buttons look classier than ever. Simply great!