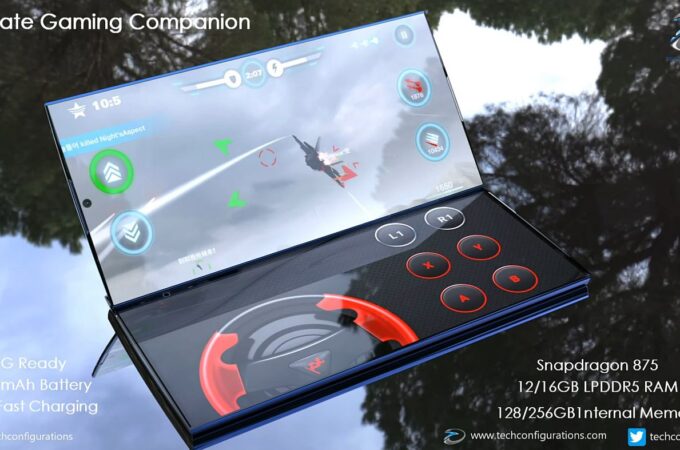 Back in the day there was a huge fuss being made about gaming phones, especially a PSP Phone and an Xbox Phone. Those were two concepts we wrote about a LOT in this website’s infancy, in 2008 and 2009. The trend has faded and it was only two years ago that the gaming phone became cool again and oddly enough it wasn’t made by Sony or Microsoft. Techconfigurations channels that PSP Phone approach and throws it all into the Sony Xperia 1 Play, a brand new concept phone rendered below.

I’m sure you remember the Xperia Play, Sony Ericsson’s gaming smartphone from almost a decade ago. It had some good ideas, some pretty nifty controls and while the build quality wasn’t stellar on the outside, the insides were an engineering marvel. The title choice was rather limited though… Now we get to meet the Sony Xperia 1 Play, which is a smartphone first, laptop replacement second and gaming phone third. Techconfigurations envisions a powerful flagship phone with a sliding secondary screen below the main one.

That provides you with a laptop mode and a sort of miniature experience of the Lenovo Yoga Book. The screen is a 6.9 inch AMOLED with 120 Hz refresh rate and a ton of pixels to show. Bezels are ultraslim and we also get an ultrasonic proximity sensor. Stereo speakers are here, but the core of the experience is definitely the sliding screen. It starts to feel like a Nokia Communicator towards the middle of the presentation video below.

This device packs a Qualcomm Snapdragon 875 processor, up to 16 GB of RAM and 256 GB of storage. It also has 5G, a 5000 mAh battery and 65W fast charging. The bottom screen can show gaming controls, even a steering wheel, arcade controls and a variety of other types of input means. It can also show a full QWERYT keyboard and touchpad, plus it’ll let you slide the top screen at 45 degrees for a laptop experience. Quad speakers are also triggered in gaming mode.

Somehow, the Xperia 1 Play remains pretty slim and compact, in spite of all the tech and also comes in very colorful hues. If I were to guess, I’d say that Sony could sell this at $999 and make quite the splash.