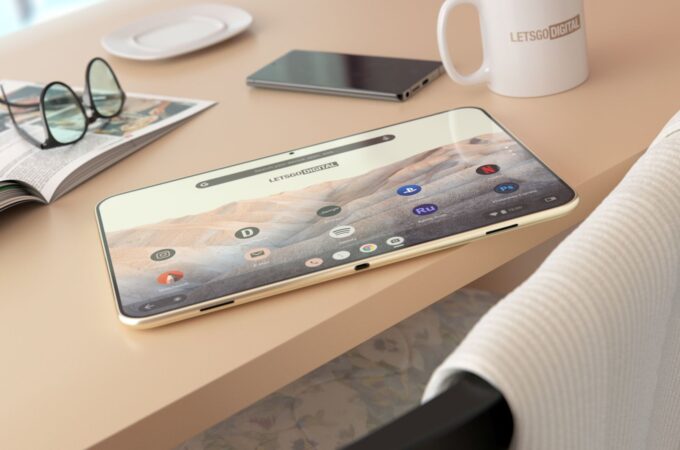 Google hasn’t launched a tablet in a while now, focusing on Chromebooks and Pixel phones rather than slates. Well, the year 2020 was great for tablets and now companies are getting back into this segment. The likes of Nokia and Motorola come to mind and now Google is apparently ready to get back in the saddle.

We have fresh renders of the device published by Letsgodigital and created by designer Giuseppe Spinelli aka Snoreyn. The device is actually inspired by a patent published recently by Google, with a curved back side and narrow bezels. The patent was published in Japan and dates from March 2019. The Google Pixel tablet has a full screen design with very slim screen edges and rounded corners.

For the color and material choice Giuseppe was inspired by the recently unveiled Google Pixel 6. We see the same power and volume buttons, as shown in the renders here. There’s also a punch hole camera, something we don’t see often on slates. There are stereo speakers here, an USB-C port at the bottom, Android 12 is the OS here and it would nice to see a different version of it for tablets, a fork like iPadOS did also HarmonyOS and recently MIUI for Tablets.

Google may also opt for Chrome OS, which it uses on its 2 in 1 laptops. The last Google tablet was the pixel Slate, also a Chrome OS tablet. I think that such a product is unlikely we should expect a foldable from Google rather than a big screen tablet. Samsung was the favourite partner for Google to make tablets, so if it does happen they’re the usual suspect.

About Kelvin
Passionate about design, especially smartphones, gadgets and tablets. Blogging on this site since 2008 and discovering prototypes and trends before bigshot companies sometimes
How Much CBD is Safe for Pet?   Samsung Galaxy S22+ Design Revealed by 91Mobiles and @OnLeaks