HP Gets Back Into Phones With a Foldable Clamshell Smartphone 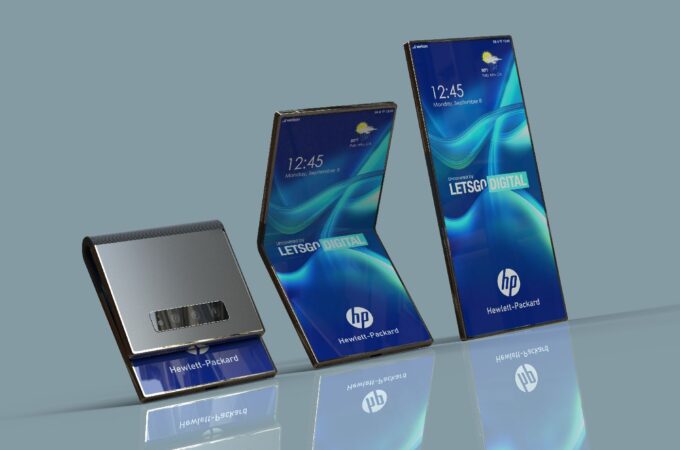 HP hasn’t exactly been a landmark, when it comes to phones over the past years and ever since the HP Elite X3 in 2016 they’ve pretty much given up on the segment. The Palm purchase and the subsequent crash and burn really hurt them. Turns out that they just patented a foldable phone and they may be coming in hot with novelty over the next year or so. Letsgodigital has turned the patents into renders below.

HP seems to be going the clamshell route for its foldable, with a device that reminds us of the Moto RAZR 2019/2020 and the Galaxy Z Flip. The unusual thing about is that it offers two flip modes: either the two parts of the screen overlap, or there’s a little segment left outside, showing notifications, missed calls, useful data. The main camera is integrated in a horizontal module, not vertical, much like LG has been doing on its phones for a while now.

The patent was filed a while ago, back in February 2019 and it was approved in august 2020. The handset seems to be very narrow and quite long, but it lacks a selfie camera. We also don’t quit get to see the buttons. It’s a very slim foldable phone, one that leaves a bit of extra wiggle room in the fold part between the two screen sides. HP is said to use a “planar flexible substrate” to avoid damaging the screen when it’s bent. That substrate gets thicker when you put pressure on it.

In general materials get thinner when you stretch them, but that’s not the case here. Materials used for this purpose can be rubber, foam or fiber, which can be attached with an adhesive to the flexible display. Other alternative are a hinge with interconnected sliding links for example. Honestly, I don’t think that HP would want to risk getting into the phone biz anymore, maybe only if they can buy another brand, like Alcatel or BlackBerry.

About Kelvin
Passionate about design, especially smartphones, gadgets and tablets. Blogging on this site since 2008 and discovering prototypes and trends before bigshot companies sometimes
AirPods Studio Rendered by Concept Creator and Receiving Major Leaks   Microsoft Surface Duo is a Failure, But the Surface Solo Saves the Day