Indian designer Rahul Sharma brings us a very interesting HTC concept phone called HTC Apocalypse, with Android Key Lime Pie as the OS. Under the motto “Built to Dominate”, this wide handset has a very nice back texture and a very simple design, that’s also appealing. It also seems to have no real edges, so we’re dealing with an edge to edge display affair. 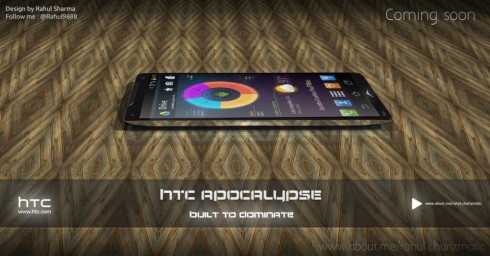 HTC Apocalypse has a 2 GHZ AMD quad core processor with GeForce EVGA GTX GPU and a 4.8 inch display with IPS LED technology and oleophobic coating. This handset features 2 GB of DDR2 RAM, Android Key Lime Pie as the OS and HTC Sense 4.5 with Biosense. Speech to text is available too, plus Read Aloud, Audio Browsing and Smart Voice, maybe some sort of S Voice rival. The screen resolution is 1920 x 1080, with 2D/3D switching available. HTC Apocalypse also offers a electrosensitive display, that allows you to select without touching, probably by simply hovering the finger above the selection.

Under the hood we’ve got a 3600 mAh battery (Li Ion), enhanced with 800 charge cycles. At the rear there’s the familiar Kevlar coating from the Motorolas. Sounds like a doable device for the end of 2013… I guess.