HTC M9 is expected to be the 2015 flagship from HTC and today designer Neoh Wei Sheng gives it a go. We have seen several other renders of the device in the past, but this one is a bit more predictable. 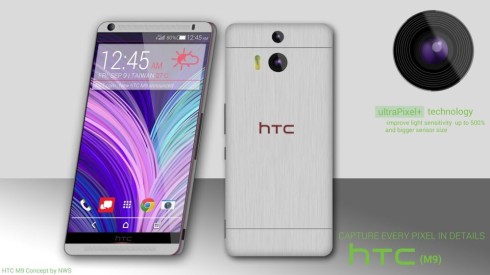 We get a front camera with wide angle lens, big BoomSound speakers, a Duo Camera with dual LED flash and Ultrapixel technology and a narrow bezel screen, probably past the 5 inch diagonal limit. HTC M9 also comes with a physical camera button, if I’m not mistaking and it also sports 4G LTE connectivity and a metal body with some minor polycarbonate insertions.

What’s interesting to me is that the designer mentions September as the launch time frame of this HTC concept smartphone. What I like the most here are the bezels of the HTC M9 and the way they’re discretely rounded, possibly borrowing some design traits from the HTC Desire 816. That was an excellent phone, by the way and a huge seller according to rumors. I’m also expecting this screen to be a QHD one, by the way.