It’s been a while since the prolific Bob Freking designed something for us, but luckily he’s back, with a very interesting concept: the HTC Nexus One 2013. Those of you who remember Android history, may know that the first Google Nexus phone was the HTC One and now we’ve got another… One. 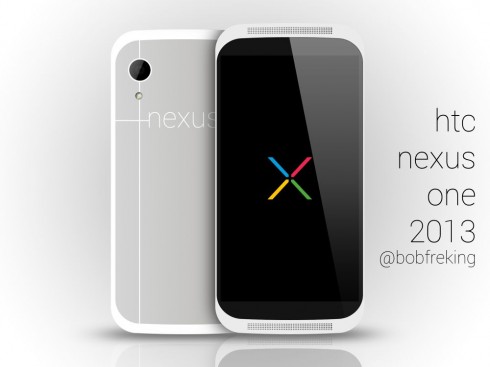 HTC Nexus One features a 1.8 GHz Snapdragon 600 processor, a Full HD Super LCD 3 screen and an 8 megapixel Ultrapixel camera. It also adopts an all aluminum unibody case and runs Android Key Lime Pie. Bob also informed us that according to Wall Street Journal Google is feeling threatened by Samsung, that has become way too attached to Android and they have a huge market share, so they won’t leave the next Nexus phone to them.

It could go to either Motorola or HTC, but if you ask me Sony is also in the books. As you can see, this device borrows a bit from the HTC One, a bit from the One X and a bit from the LG Nexus 4. I like the rounded form factor, a bit more rounded than the HTC One and I imagine that the back has a soft touch material. Is a Nexus 2013 phone made by HTC possible?