HTC Nexus 6 is “The Right Amount of New”

And here we are again, with a new HTC Nexus 6 concept, in spite of the fact that the latest rumors peg Motorola as the maker of the Nexus X. Why Nexus X? Because there are copyright problems with Philip K. Dick’s novel “Do Androids Dream of Electric Sheep?”, that features a robot called Nexus 6. Anyway, I digress, so let’s check out the concept… 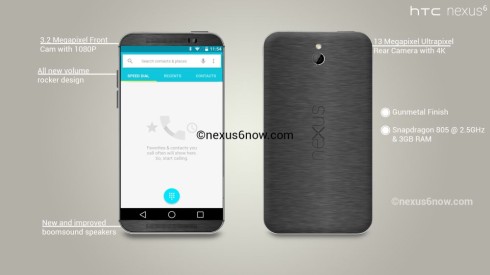 The HTC Nexus 6 features a pretty basic design and keeps the rounded top and bottom of its predecessors. There are also design traits borrowed from modern HTC models, like the top and bottom BoomSound speakers for example. We’ve got Android L on board, with its trademark geometrical shaped Android buttons on the screen. There’s a 13 megapixel back camera with 4K video capture, a feature that has been missing from modern HTC handsets.

At the front we’ve got a 3.2 MP shooter, that I’m sure features a wide angle lens. This Nexus 6 concept features a gunmetal finish case, a Snapdragon 805 processor inside, clocked at 2.5 GHz and 3 GB of RAM. The screen is a 5.5 incher LCD unit, most likely with a Quad HD resolution. What do you make of this HTC Nexus 6 concept? Would Google agree to switch to metal?