The phone designer community is split into 3 these days: those who design HTC One M9 concepts, those who render the Samsung Galaxy S6 and those who design anything else. I have a feeling that this is yet another attempt at envisioning the HTC One M9, the one shown below. 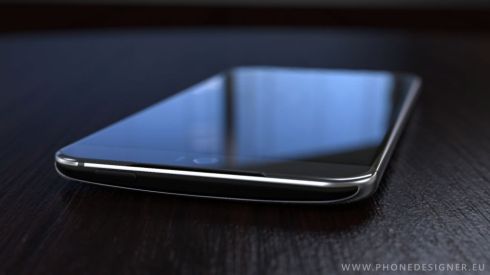 Jonas Daehnert is its creator and he posted it to the Phone Designer Facebook page, where you can check out his nifty designs. He even made it a cover picture, so it’s a big deal. The first hint it’s a HTC M9 is the slit speaker at the top and considering the leak this year HTC will go with discrete slit speakers, so… Also, it’s important to mention the background of the designer, who has a tendency to create Nokia models, so we could be wrong.

However, most of his Lumia concepts (and most Lumia concepts on the web) still keep elements of the Fabula Design, which I don’t quite see here. There’s a metal and polycarbonate thing going on here, with gently curved corners and what seems to be a curved back, considering the way the phone sits on the table. Case in point: Lumias don’t have curved profiles. Ready for a new HTC Hima render?

About Kelvin
Passionate about design, especially smartphones, gadgets and tablets. Blogging on this site since 2008 and discovering prototypes and trends before bigshot companies sometimes
Nokia Lumia 1 Concept Features Rotating Camera   HTC Phone Render Has a Nexus Vibe to It