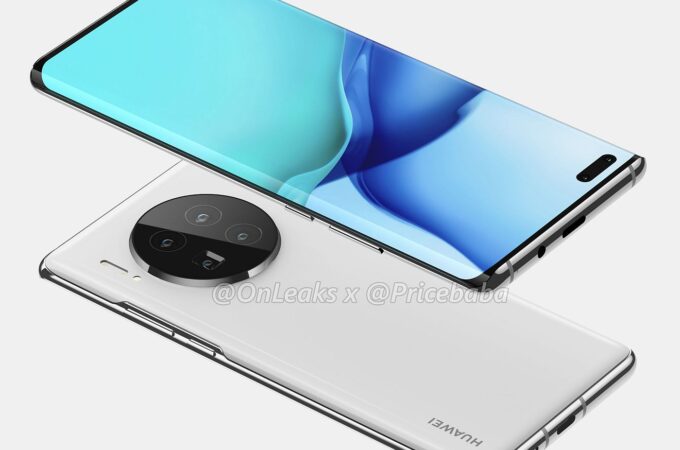 One of the things that made me laugh when I read the comments regarding the latest leaks of Huawei Mate 40 Pro renders was the fact that its back camera looked like a punched eye. People were referring to the periscope camera that spoils the symmetry within the quad cam setup and looks like a swollen eye after a fight.

These renders come from Pricebaba and @OnLeaks and reveal a glimpse into the near future. By all accounts, Huawei is going to launch the Mate 40 Pro in October, as its new flagship and inaugural model for the 5 nm Kirin 1000 processor. The phone itself, judging by the renders feels like a combo between the Huawei P40 Pro and Mate 30 Pro. However, in spite of having a waterfall screen, this time it doesn’t ditch the physical volume buttons.

It also adopts the much hated pill shaped cutout for the dual selfie camera. Interestingly enough there are two mystery cutouts at the top side. One of them is surely the infrared sensor, used to control gadgets around the house, while the other is the real mystery. Some say it may be a pop up sensor for a Face ID mechanism, in lieu of the sensors that were in the notch of the Mate 30 Pro and Mate 20 Pro. The back camera is huge, but keeps the rounded module that feels like we’re back in the days of the Nokia Lumia.

We’re supposed to also get a 6.7 inch OLED screen, a 9 mm waistline and very fast charging, perhaps 66W worth. I can’t say any of these traits feel shocking and I feel that people will be once again polarized by Huawei’s choices, including the lack of Google Play Store and Services. Rumors also talk about a huge 108 megapixel main camera, but I wouldn’t bet on it, since Huawei has yet to venture in those waters and that would be a Samsung sensor they’ll find hard to get.

Be sure to also watch the 3D video render of the Huawei Mate 40 Pro below.

About Kelvin
Passionate about design, especially smartphones, gadgets and tablets. Blogging on this site since 2008 and discovering prototypes and trends before bigshot companies sometimes
Xiaomi Mi 10 Ultra Official Renders and Poster Leaked   Sony Xperia 1 Play is the Gaming Phone We Didn’t Know We Needed