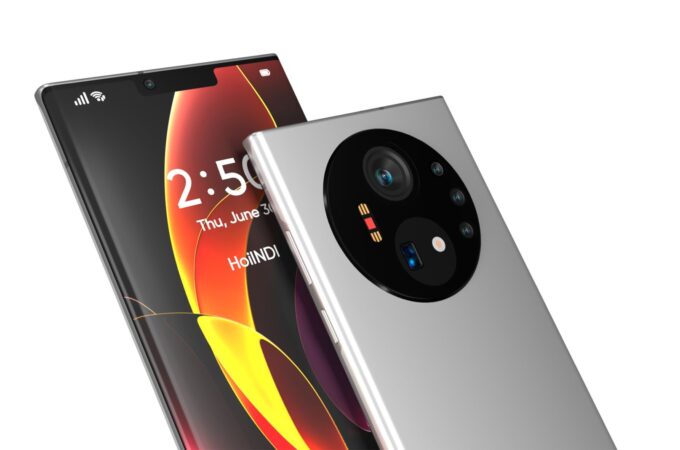 Huawei just launched the Nova 10 series, so there’s only one more model left to launch in 2022: Huawei Mate 50. The device has leaked a few times in renders or specs, but none of them was convincing enough for me. We have renders of it below.

This is the creation of HoIndi and it comes with a notch upfront, plus a large array of cameras at the back side. There’s the main sensor, which is most likely similar to the Xiaomi 12S Ultra one, a 1 incher Sony. There’s also a periscope camera here and 3 other sensors on the right side. I’m sure one is an ultrawide, Macro and the second telephoto cam. I also see the LED flash and a color sensor. The waterfall display is still a thing, with a high degree of curvature to the left and right side.

The device seems to borrow some design elements from the Mate 30 Pro and Mate 40 Pro, but at least it doesn’t ditch physical buttons, like the Mate 30 Pro did. It’s very hard for me to even predict a CPU here, but it’s probably a 4G version of the Snapdragon 8 Gen 1. I also have a hard time predicting the selling point of the device. Mate 40 Pro was all about video capture, face tracking, well calibrated colors. This may just happen again and the True Chroma of the P50 series may also appear here.

We’d also be lucky to get a stylus I think.

About Kelvin
Passionate about design, especially smartphones, gadgets and tablets. Blogging on this site since 2008 and discovering prototypes and trends before bigshot companies sometimes
Why Mobile Gambling is Reigning Supreme   4 Different Ways You Can Pay With Your Phone