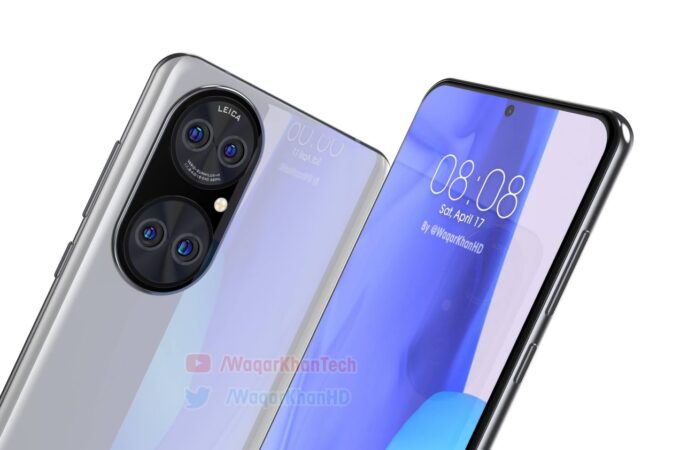 Huawei P50 has been leaking quite a bit over the past 2 months, with detailed (or less detailed renders) and some camera specs here and there. At the same time a large part of the features is still being kept in the dark, on account of the Huawei secrecy. In the meantime we get to see a new set of renders courtesy of designer Waqar Khan. Let’s see them and don’t forget we also have a video of the device below.

For a while now it appeared that we would get two huge camera lenses at the back side, in a figure 8 camera module. Now it seems we’re getting 4 sensors, 2 in each circle of the “8”. Keep in mind we’re dealing with the Huawei P50 here, not the P50 Pro or P50 Pro+, so it doesn’t got all out with the optics. That also explains the flat screen and bezels which are a bit large by today’s standards. The screen is also not quad curved as rumored for the flagship. I also don’t see any periscope camera and the back module doesn’t protrude.

Color choices include brown, blue/green, silver and black. Some models are glossy, others matte, but the frame is always glossy. We have a singular selfie front camera, cut in a punch hole and we got rid of the dual selfie camera cutout. I think we’ll no longer have a single music speaker and an earpiece replaced by a piezoelectric mechanism, but instead we’ll get stereo speakers (top and bottom). I also think that the Huawei P50 won’t jump straight to 120 Hz, but stick to 90 Hz and leave higher refresh rates to the Pro and Pro+ models.

The camera design isn’t exactly new, as the designer was also partially seen on the Huawei Nova 8 series.

About Kelvin
Passionate about design, especially smartphones, gadgets and tablets. Blogging on this site since 2008 and discovering prototypes and trends before bigshot companies sometimes
Samsung Galaxy S22 Ultra has a 192 MP Camera, 18 GB of RAM (Concept Video)   Samsung Galaxy Z Scroll is the Rollable Phone With S Pen We Want