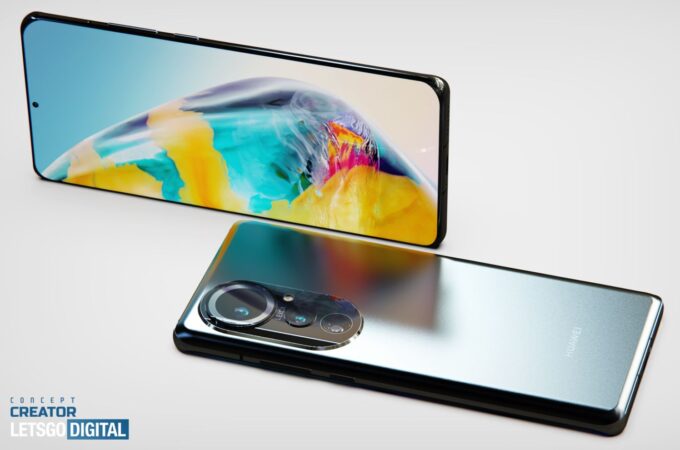 Everybody was befuddled by the figure 8 camera on the Huawei P50 Pro during the last leaks, also because we couldn’t quite see which sensors were present in the module. Now Letsgodigital and Concept Creator aim to deliver a clearer view of the flagship, courtesy of a brand new concept, shown below.

Last we heard, the Huawei P50 series was debuting on April 27th, but a May or June late release is also likely. The latest leak also talks about a Sony IMX800 1 inch image sensor as the main cam for the Huawei P50 Pro. What puzzles me is that I can’t quite see any periscope telephoto camera at the back. We also see only 3 back cameras: wide, ultrawide and telephoto. Jermaine Smit aka Concept Creator has also envisioned the device as having a quad curved design, with curves on 4 sides, plus a single punch hole for the selfie camera.

There’s also word about an OLED 6.6 inch 120 Hz screen with Quad HD+ resolution. Unlike the P30 Pro and P40 Pro, which didn’t have stereo speakers, this one is supposed to bring them back. The piezoelectric speaker wasn’t exactly brilliant. An IR blaster and in display fingerprint scanner are expected here. The number one problem for Huawei to solve is getting a CPU for this phone, which sounds pretty hard. Kirin 9000 or 9000L are uncertain and even more uncertain is a potential Qualcomm Snapdragon.

I also wonder about the functionality of the huge lens for the main camera and if it’s a Liquid Lens or not, seeing how Xiaomi inaugurated the trend. Be sure to watch the Huawei P50 Pro concept video below:

About Kelvin
Passionate about design, especially smartphones, gadgets and tablets. Blogging on this site since 2008 and discovering prototypes and trends before bigshot companies sometimes
The Most Common iPhone Problems And How To Remedy Them   LG Rollable Smartphone Concept Is Back, Courtesy of TS Designer