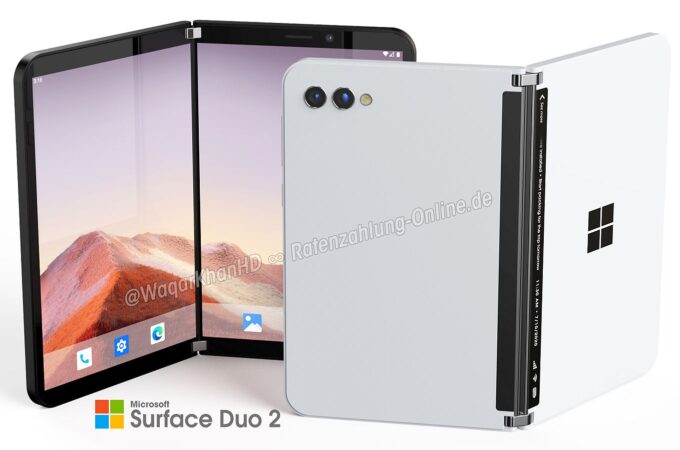 Microsoft has been struggling to pull together the Surface Duo for a while now. The device was unveiled in October 2019 and it has yet to be launched. At first it was a mere prototype, one that didn’t even have a camera and also had a beefy design and thick bezels. Now it’s more refined and meant for a Holiday 2020 release. In the meantime designer Waqar Khan has already dreamed of a Surface Duo 2.

First of all the name: Surface Duo 2 almost sounds as stupid as the Xbox Series X. Duo and 2 are pretty much the same thing, as far as I know. The designer also has some sources who detailed specs for the Surface phones. While the Surface Duo should come out with a Qualcomm Snapdragon 855, but no 5G modem, plus an 11 megapixel camera. Microsoft Surface Duo 2 may perform an upgrade, to a Snapdragon 865, 5G and multiple cameras, within a slimmer design.

Surface Duo 2 could also fix another design problem: the first Surface Duo can’t show notifications or useful info on any sort of external screen when closed. .Well, the newcomer does, since it has a discrete OLED status bar close to the hinge, which can be read with ease. It’s still an Android smartphone, but with a Microsoft launcher. Other novelties compared to the first gen model are as follows:

The source also suggest various use scenarios that may include dockable keyboards. I’m surprised a stylus doesn’t get thrown in the mix, as well as a narrower central bezel, in the hinge area. To be honest, compared to the other foldables on the market, this feels… dated.

About Kelvin
Passionate about design, especially smartphones, gadgets and tablets. Blogging on this site since 2008 and discovering prototypes and trends before bigshot companies sometimes
iPhone Slide Pro Brings Back the Sliding Second Screen; Do We Need It?   Samsung Galaxy Note 20 Plus Leaked Renders Show Huge Camera Lenses