Microsoft Surface Phone Concept has a 5 Inch Display, Even Has a Keyboard (Video)

Created by Techradar, this Microsoft Surface Phone concept features some high end specs and it’s basically a smaller Surface Tablet, since it even has that cool keyboard. The device packs a 5 inch 1280 x 720 Super AMOLED+ screen and runs a hybrid between Windows Phone 8 and Windows 8. 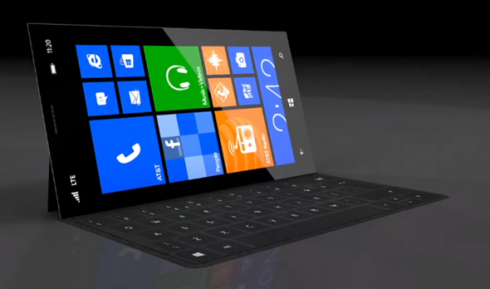 This handset has a full USB 3.0 port, a 12 megapixel camera with “ultra bright” flash and a kickass kickstand, shown in the video below. The mini touch cover here is the keyboard we were mentioned before and it certainly looks cool, although we’re not exactly sure how functional it is on a phone. If I’m allowed to speculate on other features of the device, well, it may have 2 GB of RAM, a quad core Snapdragon S4 Pro CPU, LTE, NFC and a magnesium alloy case, since we’re keeping the resemblance with the Surface tablet.

I’ve heard a rumor at some point that Windows Phone 9 will actually be a combo between Windows Phone 8 and Windows 8, so maybe this is supposed to be a WP9 flagship device. I would also add a special Skype camera on board, activated by the double press of the camera key on the device, to instantly start video chatting. How cool would that be?