Microsoft Surface Phone is Inspired by the MS Surface Tablet

Designer Jonas Daehnert is already famous for the Nokia Lumia 920 concept and now he’s back with something that everyone was thinking once Microsoft announced the Surface Tablet: a Surface Phone. The Microsoft Surface Phone is a Windows Phone 8 unit, that Microsoft is probably afraid to come up with, after their Kin phones didn’t take off as planned.

This device’s design is inspired by the Surface Tablet, from the sides, to the ports, speakers and overall look. If you want specs, know that Jonas envisions a quad core CPU inside, maybe a Tegra 3, 2GB of RAM, 32/64GB of storage and a 1280 x 768 pixel display. There should also be a 16 megapixel camera at the back with Full HD capture and want to add to the list LTE, NFC, a 5MP front camera, if possible and a 2.500 mAh battery. As you can see, the model runs Windows Phone 8, that includes those smaller tile sizes.

Will this rectangular and elegant block of technology manage to change people’s passion for the iPhone? The Surface tablet made some people happy already, since they dig its design. Will a Microsoft Surface Phone make you happy? 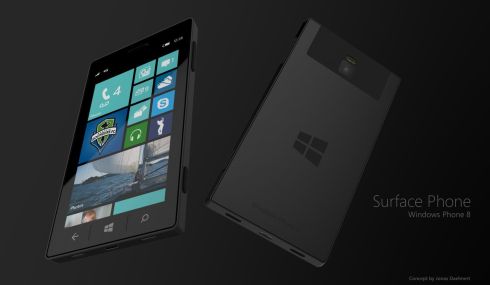