Early this month HTC and Facebook launched a Facebook Phone and now we can already start dreaming of other social networking-focused handsets. Suman Chatterjee imagined a concept handset called Google Socio, one that integrates Google+, Twitter and Facebook at its core. 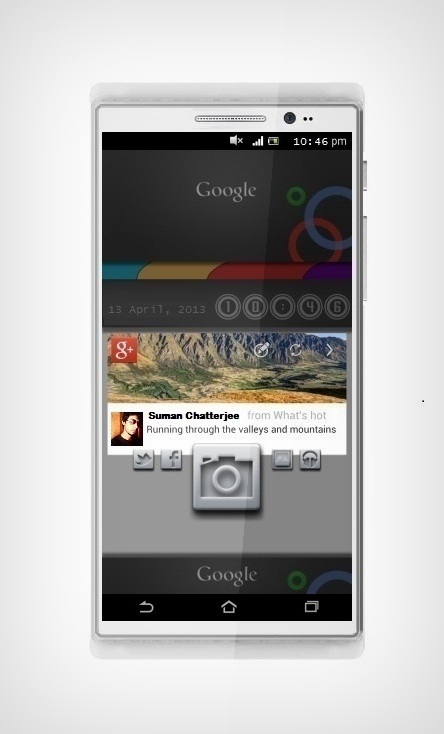 The phone comes with a Google UI that’s different from the default home application in the Nexus series. The Socio phone is made by Google and Motorola, supposedly and its purpose it to grab a slice of the social networking handset market. In order to access the app drawer, the user will have to pull down the clock and time widget bar downwards.

The smartphone packs a 4.9 inch display with Full HD resolution (IPS LCD) and other specs include a Snapdragon 600 quad core 2.1 GHz CPU, Adreno 320 GPU and a 2700 mAh battery. 3 GB of RAM are here, as well as up to 64 GB of storage and a microSD card slot. At the back of the Socio concept phone there’s a 13 megapixel camera with Full HD 30 fps video capture, while upfront there’s a 2.1 MP shooter. 4G LTE and Android 5.0 Key Lime Pie are also among the features, as well as wireless charging.

Another social networking phone out there?