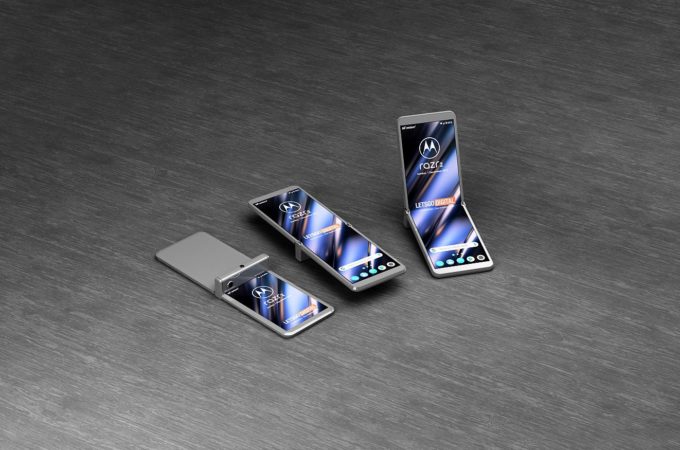 Motorola RAZR 2019 seems to have captured the hearts of quite a few people and now we’re preparing for a follow-up already. Motorola RAZR 2020 has already appeared in a few patent, sketches and leaks, but now they are being turned into renders, thanks to Letsgodigital. And lo and behold, we also have modularity.

Motorola RAZR 2 was previously reported on by Letsgodigital, who also mentioned things like touch sensors on the side, for extra controls. This time we see a patent and some competent renders. At its core the new RAZR isn’t very different from the first one, except for the modularity part. It seems to also get a fisheye camera and a modular system, that lets you add extra hardware components, like a projector or high quality stereo speakers.

The device remains a clamshell at its core, but the area where the screens connect may also have some pogo pins or magnets used to attach various modules. Documentation is rather vague about the design, mentioning both the option of a flexible screen, but also two separate screens. The lower part could be provided with a physical keyboard even. The attachment around the hinge area looks huge and uncomfortable, both when holding the device and also when laying it on the table.

The Moto Z series never took off as much as Moto would have wanted it to, so I’m not sure spoiling the Moto RAZR with a module is a good idea. Well, at least the module is small and probably adds a kickass camera in the mix. Documents mention a fisheye camera with 360 degree capture and also a 12 megapixel sensor. There’s also talk about an infrared emitter, probably for face recognition. We also seem to get rid of the notch this time around.

Also, the second external screen seems much larger now. With the modular aspect in the mix, expect the price of the device to blow up past the $1500 mark of the first unit.

About Kelvin
Passionate about design, especially smartphones, gadgets and tablets. Blogging on this site since 2008 and discovering prototypes and trends before bigshot companies sometimes
Pablo Escobar’s Brother Now Makes a Foldable Phone, With a Very Low Price   Samsung Galaxy S11 Plus Gets a Lot of Specs Right in This Final Design (Video)