Harman Kardon Smartphone Concept Has a Huge Speaker at the Back 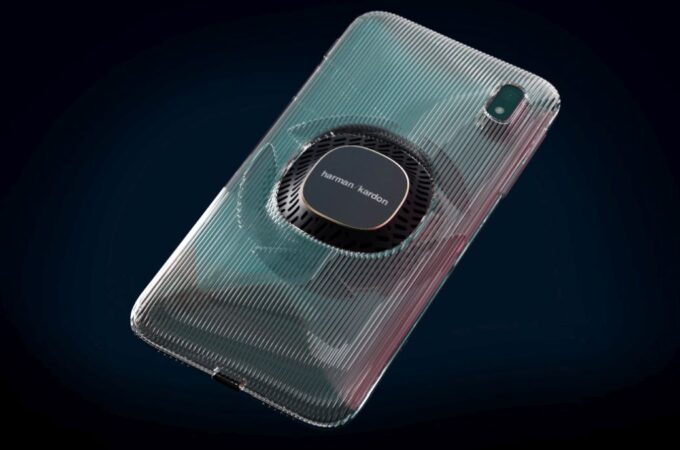 Score one for the music phones! Just a few days after the Nokia concept music phone from Concept Creator we come across a brand new music phone, this time one branded Harman Kardon. Designed by James Tsai, the device is showcased below.

Harman Kardon has been under Samsung’s wing for years now and they’ve been quite protective of this brand. If anyone makes a Harman Kardon phone, it’s going to definitely be Samsung. The core of this design is a gigantic speaker at the back, dead center. I’m sure it packs a ton of punch, maybe even more than landmark devices, like the HTC One models and ASUS ROG Phone units, since those had a ton of decibels to offer.

At some point during the evolution of these speakers, control gets more important than decibels. You need to control vibrations, limit distorsions and also handle air circulation and magnets. Dubbed Harman Kardon Harmony, the conceptual smartphone replaces the camera bump with a speaker bump. This is a 360 degree speaker at the back side and it’s styled to match Harman Kardon’s other products.

It has a 45 degree grille under a transparent clad, which helps guid airflow to maximize sound output, while also protecting the phone, like a case would. By the way, the face of the device isn’t half bad and the punch hole for the dual selfie camera doesn’t bother me, unlike the one from the P40 Pro and Galaxy S10+.

For some reason I feel that a modular/accessory speaker of this sort could be better than a dedicated phone.

About Kelvin
Passionate about design, especially smartphones, gadgets and tablets. Blogging on this site since 2008 and discovering prototypes and trends before bigshot companies sometimes
Samsung Galaxy Z Fold 3 is Already Here in Concept Form   Nokia N73 Music 2020 Edition Brings Back the Bass