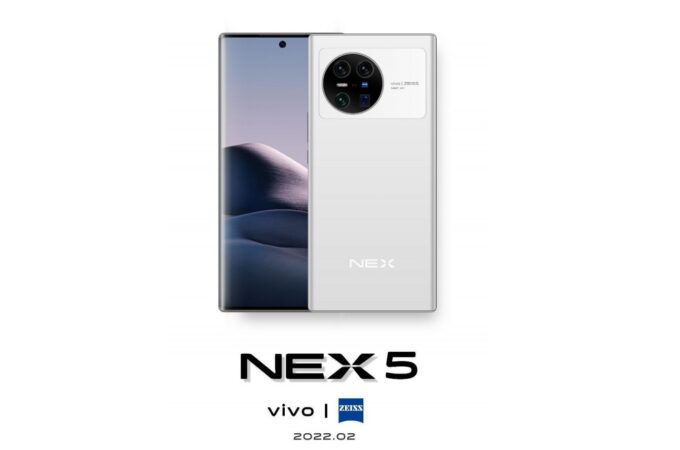 Vivo is rumored to making a new NEX device, tentatively named vivo NEX 5. The device has jus leaked online in a bunch of renders, together with a February release date. The NEX is to Vivo what Mix is to Xiaomi, an experimental series meant to test drive technologies.

The Vivo NEX 5 is said to have an under display camera, much like the APEX 2020 concept, but the render shown here disputes that claim. What’s more odd than that is the fact that we’re expecting a very large 7 inch screen here, a quad curved one. By the way, over the past 48 hours we learned that Samsung was also preparing a quad curved design for the Galaxy S23 in 2023.

Back tot he Vivo NEX 5, it features a round back camera, with the Zeiss logo next to it and a periscope camera at the bottom. The image also mentions February 2022 as the release window. Originally, the device was supposed to debut in the first half of 2021. There’s also the “50MP GN1” inscription on the back side, hitning at the Samsung 1.2 micron 50 MP ISOCELL GN1 camera sensor.

We also get to see a periscope style telephoto camera at the bottom right with 5X optical zoom. NEX is also rumored to come to Europe at some point.

About Kelvin
Passionate about design, especially smartphones, gadgets and tablets. Blogging on this site since 2008 and discovering prototypes and trends before bigshot companies sometimes
OnePlus 10 Ultra Renders Based on Leaked Schematic Are Out   Crypto History: Bitcoin in Previous Years