Why PKI Is Important For Every Business In 2022? 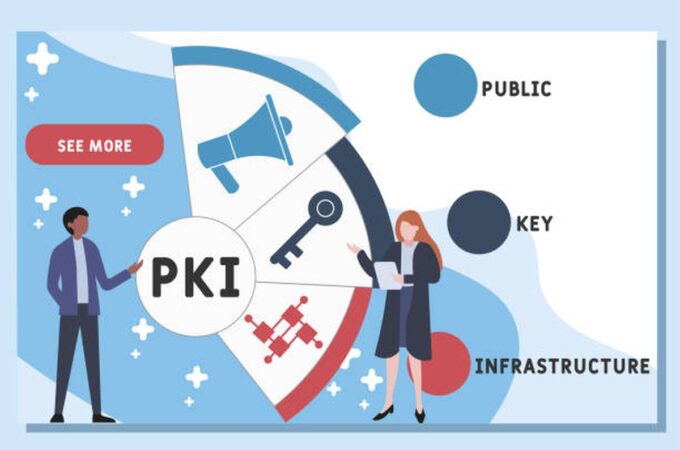 Over the past decade, there has been an exponential use of technology in businesses  globally. The dependency of companies on electronic transactions and digital information  has increased multifold, and so has the challenges to maintain data security. As a result,  businesses face stringent data privacy compliance challenges and data security  regulations. With cyber-attacks and malicious insiders constantly threatening enterprises,  the networks and business applications use digital credentials to control how the users  and the entities access the critical system resources and sensitive data.

Today, organizations rely on Public Key Infrastructure or PKI to manage security through  encryption. They either implement and manage their own public key infrastructure or opt  for third party providers offering PKI as a service. PKI governs the issuance of digital  certificates to provide unique digital identities for users, devices, and applications, protect  sensitive data, and secure end-to-end communications. Today, the most common form  of encryption involves a public key, which anyone can use to encrypt a message, and a  private key or the secret key, which only one person should use to decrypt those  messages. People, devices, and applications can use these keys.

PKIs are necessary for ascertaining the identity of different devices, people, and services.  In other words, PKIs go way beyond user IDs and passwords, employing cryptographic  technologies such as digital certificates and signatures to create unique credentials that  software can validate beyond reasonable doubt quickly and on a mass scale.

Today, PKI technology is already used more widely than one may think. It is a foundation  of how data is encrypted as it is passed over the internet using SSL/TLS – without which,  e-commerce will not be practical. PKI is used to digitally sign transactions, documents,  and software to prove the source and the integrity of those materials – an essential task  as Trojans and other malware proliferate. Finally, PKI establishes the security of the  consumer world by supporting the authentication of tablets and smartphones, citizen  passports, games consoles, mass transit ticketing, and mobile banking.

PKIs are essential in today’s digital age because millions of applications and connected  devices require certification. Well, the answer is that because almost all security controls  ultimately come down to authentication and access controls. Undoubtedly, encryption is  a powerful tool for protecting data, but it is forever useless unless that data can be  decrypted back. It becomes critical to determine who has the right to decrypt data and  access applications.

When we think about cloud computing, outsourcing, virtualization, and other examples of  where the traditional perimeter defenses in an organization have started to disappear, the  need to authenticate and verify becomes critical and precise. If a business cares about  the integrity of its data and systems, then it must either use a third-party service it can  trust or deploy a PKI with an appropriate set of checks and balances. If the business fails  to do so, it exposes itself to the risks, and it is increasingly vulnerable to other potential  victims.

Today, businesses issue millions of certificates to authenticate a fully mobile, multi-device  workforce. Digital certificates remain the number one way to identify a company’s assets  and make sure that they have secure communications through those assets to manage  them remotely. Beyond employee devices, businesses also have to work with embedded  certificates in all kinds of cloud systems.

Managed PKI Services As the Future

However, as PKI becomes more critical and prevalent, the scenario gets more  challenging. Especially today’s connected digital world creates PKI management  challenges around getting certificates where they need to go, ensuring credentials are  appropriately vetted and mapped, and monitoring already-issued certificates.

Managing, overseeing, and updating millions of certificates is a big job. Most businesses  rely on third-party managed service providers and specialized certificate management  tools to handle their PKI. This is uncanny to move to the cloud, whereas companies  migrate from self-owned data servers to third-party cloud computing providers.

When a business engages a managed service provider for PKI, it can redirect its staff’s  expertise to their business domain instead of operating infrastructure. It improves PKI  management and security by providing access to a large team specializing in developing  and running best practice PKI programs.

The modern cars being produced today are highly connected as they have features like  built-in GPS, call-for-help services, and vehicle parts that self-monitor for maintenance  needs. These capabilities create various connection points where data and software  updates get across back and forth.

Therefore, if any of these connections are insecure, the results could be catastrophic. It  would open the door for illegal parties to hack into the car to access sensitive data or  send malware to vehicles to harm people. As a result, any connected piece of the vehicle  must receive a digital certificate to ensure security. Medical devices, like robots and next

Manufacturers can quickly shore up inadvertent bugs and patch security issues as the  software is updateable. This opens up vulnerabilities by creating more connection points  for malicious parties to hack into and take over the control. PKI limits such vulnerabilities by issuing certificates to any software they communicate with. Every side can  authenticate data sources to ensure they accept updates and data from the intended  source.

One of the primary uses for PKI that is just now taking off revolves around authenticating  and securing many IoT devices. These use cases span industries, as any connected  device requires security in this day and age. Most of the compelling PKI use cases today  center around the IoT. Auto and medical device manufacturers are two prime examples  of industries introducing PKI for IoT devices.

Tagged in:importance of PKI, PKI, PKI services, what is PKI

About Kelvin
Passionate about design, especially smartphones, gadgets and tablets. Blogging on this site since 2008 and discovering prototypes and trends before bigshot companies sometimes
Tablets Best Suited to Writers   The Importance of Smartphone Security