I always doubt it when a person sends me a picture of a REAL phone, but this time it’s a very unique design. Our source, Johnny sent us a picture of what he calls the Nokia Lumia X. Supposedly, this is a real Windows Phone 8 device, that will debut in September and he got the image from a friend that worked at a Nokia Design Studio. 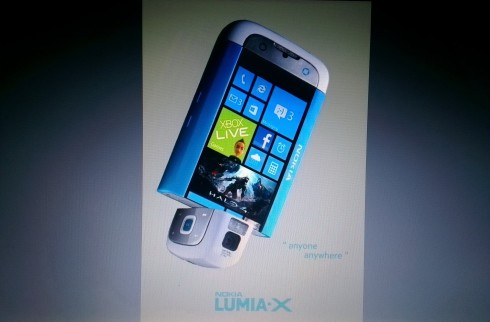 The same source says that there are new Lumias coming, much more interesting than the Samsung, HTC and Huawei phones. Nokia Lumia X features a HD screen resolution, a Clear Black AMOLED display, Windows Phone 8 as OS and a Snapdragon S4 dual core CPU. The camera at the bottom is an 8 megapixel unit with Carl Zeiss technology. As you can see the camera mechanism rotates, just like on older Nokia models like the N93 or 5700 XpressMusic. The rotating area has dedicated media keys and apparently there are also dedicated keys for playing games.

The source of the picture also says that there’s a new N-Gage phone in the making as well and this data is designed to stay in the lab, so what you see here is top secret, provided it’s real. So, do you think it’s real or not? I have a feeling there’s something fishy here, since I can’t imagine such a small phone with a HD display…