Microsoft Lovers is back, this time with a brand new Microsoft Lumia concept. This is actually a dual render, unveiling both the Lumia 1330 and the Lumia 1335 at the same time. Both are shown below. 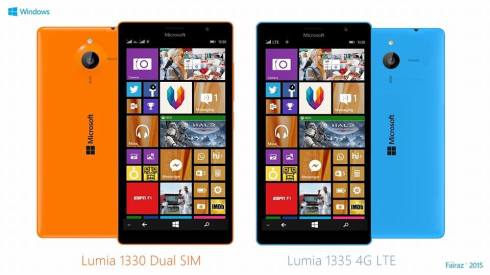 So, we’re getting 1 GB of RAM on one model and 2 GB on the other, plus 32 GB storage on both. There’s a Snapdragon 400/410 CPU in the mix and a 5 megapixel camera at the front with wide angle lens. The newcomers both sport a 14.1 MP Pureview Zeiss shooter with OIS and a 5.7 inch 720p Clearblack display. We’ve got a 3500 mAh removable battery inside, 4G LTE and LTE-Advanced, as well as dual SIM versions.

Finally, the OS here is Windows Phone 8.1 Update 2 Lumia Emerald and the Lumia 1330/1335 concepts come with Qi wireless charging via a special cover. Both concept Lumias have polycarbonate cases, with colourful plates and a rectangular facade. The design’s aren’t exactly new, but the specs are.

About Kelvin
Passionate about design, especially smartphones, gadgets and tablets. Blogging on this site since 2008 and discovering prototypes and trends before bigshot companies sometimes
Sony Xperia Z4 2015 Version Rendered by Ashraf Amer, Video Included!   Sony Xperia Micro is Here, Keeps Everything Minimal, at 4 Inches in Diagonal