We’ve seen the Nokia Lumia 1020 just days ago and already we’ve got a very closely named model: Nokia Lumia 1024. This one is created by Australian designers at Chimo I-Design Studio and as you’ll see in the source link below, the project is so advanced that they made a physical mockup of the handset. 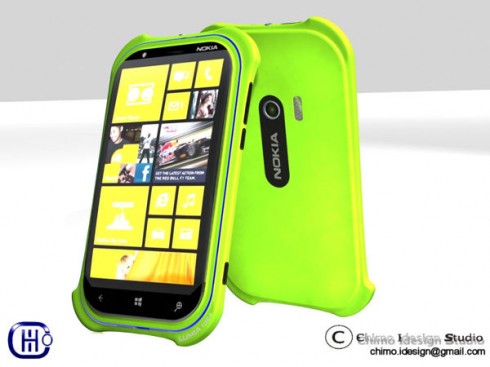 Nokia Lumia 1024 seems to be a playful and youthful phone, one that runs Windows Phone obviously and seems to have an extra layer of case around it, so to say. The device’s profile seems really thin and the design is a bit pyramid-shaped, with a large base and profile getting thinner and thinner towards the top. That outer layer of plastic makes this look like a handset for young people and also the phone may be able to withstand water and shocks, but that’s only my speculation.

We’ve got a camera with flash at the back, most likely an 8 megapixel unit and maybe with (but probably without) Pureview technology. Nokia Lumia 1024 is slightly curved at the front and I’m guessing it has at least a dual core, if not quad core Snapdragon processor inside. Nokia has a good reputation of making colourful phones and this may end up being a new model…