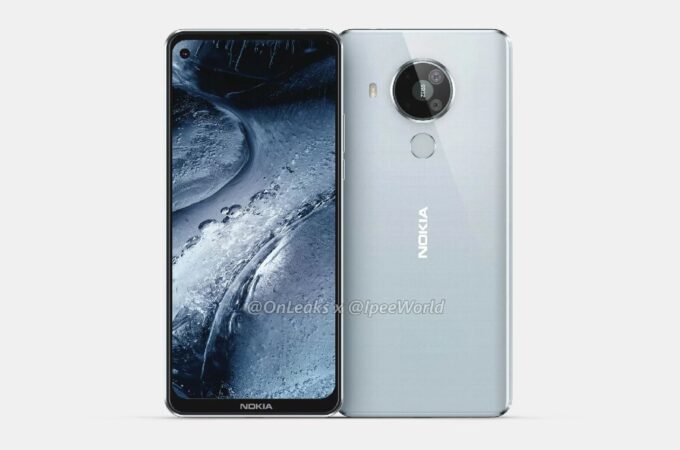 Nokia disappointed us twice this month, by not launching anything at IFA 2020 and then also nothing on September 22nd. It just brought the Nokia 2.4 and 3.4 there, but no major release happened. In the meantime we get a new leak for the Nokia 7.3, which is slated to debut with the Nokia 9.3 Pureview and Nokia 6.3 later this year. Let’s check it out.

The leaked renders were made by OnLeaks and propagated by IPEEWorld. It seems to show a new quad camera setup and a pretty predictable design. I’d even say generic, if you’ve been following Nokia for the past decade. Nokia 7.2 had a teardrop notch, but the Nokia 7.3 swaps it with a punch hole. The screen is rumored to be a 6.5 inch one, complete with Full HD+ res and probably HDR10 and with a bit of luck 90 Hz refresh rate too. There’s a bit of a chin here, with the Nokia logo on.

The back of the phone is rather similar to the one of the predecessor with minor modifications. There are 4 cameras here and the LED flash has been moved. I find it weird that the fingerprint scanner is still at the back and also odd is the rumor we’re getting a plastic back, not a glass one, which by the way Nokia 7.2 had. Leaked dimensions are 165.8 x 76.3 x 8.2 mm ad the device is said to have a Snapdragon 690 CPU, 5G connectivity and a 4000 mAh battery with 18W charging.

The front camera is expected to be a 24 MP shooter, while the main back one is a 48 MP unit. An audio jack also makes the cut and stereo speakers would also be nice. I honestly expected a bit more…

About Kelvin
Passionate about design, especially smartphones, gadgets and tablets. Blogging on this site since 2008 and discovering prototypes and trends before bigshot companies sometimes
Sony PlayStation Portable Concept Gets the 2020 Treatment   OnePlus 8T 5G 3D Video is In, Courtesy of Concept Creator