We’ve missed Edgar Mkrtchyan’s excellent Nokia designs, but luckily he’s back with a fresh one, called Nokia 990. This handset runs the first updated version of WP8, Windows Phone 8+ aka Portico and it has some interesting accessories. For one thing the designer imagined a mini music player that connects to the smartphone via NFC. 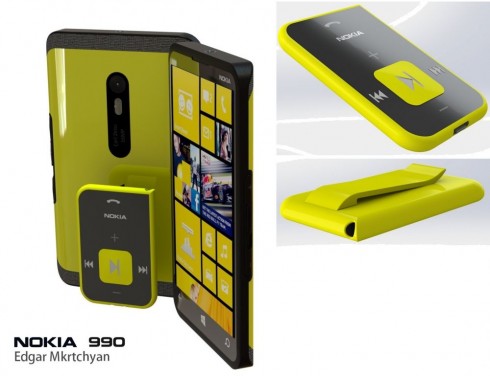 There’s also wireless charging support here and I have to say that the little player is actually a pretty cute and cool idea. The player has a microUSB port for charging its tiny 500 mAh battery. Back to the phone, the Nokia 990 concept packs a 4 or 8 core CPU, with either 1.5 GHz or 1.8 GHz in frequency. Other features include 2 GB of RAM, a 5 inch PureMotion HD+ screen with a 1080p resolution and Gorilla Glass 3 protection. The handset uses a magnesium alloy frame and a polycarbonate back shell, that also involves some aluminum.

Edgar Mkrtchyan’s Nokia render measures 11 mm in thickness and packs a 16 megapixel camera, a PureView sensor with Full HD video capture and double LED flash. There are two microphones available for sound recording and a secondary 3.2 megapixel camera upfront. The storage is 32/64 GB, plus microSD plus SkyDrive. There are also 4 loudspeakers by Monster on board and a 3600 mAh battery to juice up the unit. This truly looks like a powerful and reasonably slim model, that will take on the likes of HTC Droid DNA.