You must’ve heard that Nokia decided to give up the name Symbian, simply naming the OS on its handsets Nokia Belle/Anna etc. Thus, this Nokia Hercule concept doesn’t run Symbian Donna, but rather Nokia Donna OS, to make it clear. This design, mockup or whatever you want to call it was done by Rawad Semaan and I have to say that it’s a breath of fresh air from current designs. 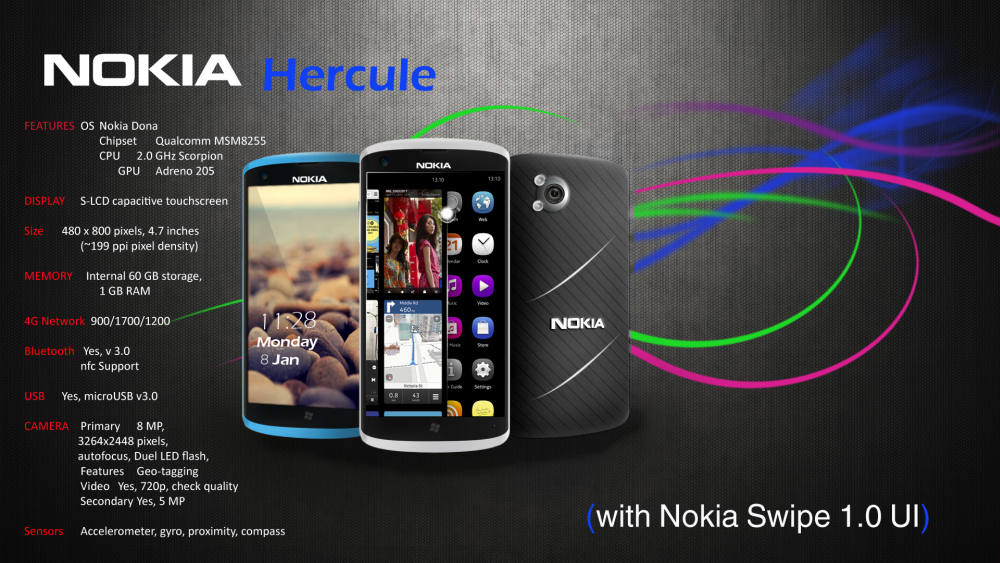 Nokia Hercule uses a 2GHz Scorpion CPU (Qualcomm MSM8255), an Adreno 205 GPU and a 4.7 inch S-LCD screen with 480 x 800 pixel display. The screen aspect sounds identical to the one on the HTC Sensation XL and HTC Titan, which is not necessarily bad. We get a surprising internal memory of 60GB, 1GB of RAM, 4G connectivity and Bluetooth 3.0, plus microUSB 3.0. At the back there’s an 8 megapixel camera with autofocus, dual LED flash, geotagging and 720p video capture.

There’s also a secondary 5MP camera and an accelerometer, gyroscope, proximity sensor and compass fill in the blanks of the hardware specs. Seeing the back of this Nokia concept, I can imagine that the texture on its back feels very nice in the user’s hand and those elegant lines remind me of an Armani suit. What do you think about this device and what do you think it lacks?