Adrian Jankowiak is a new name on our site, but his design, the Nokia Lumia 1080 is really impressive. The designer thinks that this is what the next generation Lumias could look like in the future. As you can see the device is much slimmer than current Lumias and also it has a screen that feels like an edge to edge display. 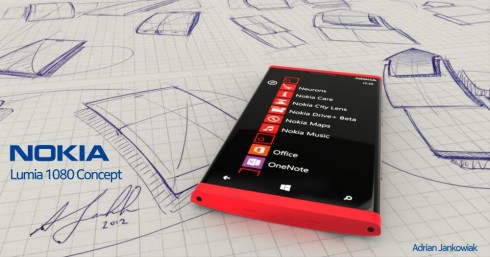 Nokia Lumia 1080 draws its name from the 4.4 inch 1080p screen upfront with a crazy 500 ppi. Diamond Fusion drawn glass from the display makes it tougher than any other screen on any other phone out there. The handset also comes with wireless charging and new Letterbox doors, that protect the charging port. At the back of this Full HD Lumia there’s a 12 megapixel PureView camera with “unbelievable low light performance”, which I tend to believe it’s true.

The variety of colors from previous Lumias is here and I have to say that the Windows buttons are more discrete than ever. My only worry is that with such almost edge to edge screen the user’s fingers may touch the display on its sides by mistake, but there are sensors for that. I would also speculate that this is a quad core phone with 2 GB of RAM, if the designer allows me. He promised further pictures of the Nokia Lumia 1080, so expect more soon! Good work Adrian!