Many people loved the Nokia Lumia 800 and its proportions, so much that they decided to turn it into a more accessible piece of gear. Enter Nokia Lumia 880, designed by Adriano Alfaro. This Nokia concept is basically a Nokia Lumia 800 with the ability to change the cover like on the Lumia 610, 620 and 710. 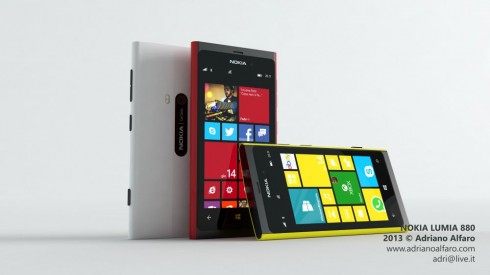 The dimensions are somewhere in between the Lumia 800 and the Lumia 920. The interchangeable back of the Lumia 880 has a low cost and it’s made from a polycarbonate shell, a bunch of buttons (camera, on/off and volume), plus the flash glass. You can also add an optional wireless charging element. This model has a removable battery, microSD storage and it measures 10 mm in thickness. The specs include a 4 inch 1280 x 768 pixel display and a dual core Snapdragon S4 processor at 1.5 GHz.

Nokia Lumia 880 has an 8.7 megapixel camera with Carl Zeiss Tessar lens, but there’s no mention of Pureview here, in case you’re wondering. We also get 32 GB of storage, 1 GB of RAM and the ability to shoot Full HD video at 30 fps with optical image stabilization. This model is totally doable, actually Nokia has some similar ones on the market right now, although they’re not high specced or packing removable shells.

[via windowsblogitalia and Adriano Alfaro]