Windows 10 became real a few days ago, after being announced by Microsoft and we learned at the time the OS was going to grace both our smartphones and tablets. The same OS is also coming to the PC and Xbox, apparently. Well, today we stumble upon the Nokia Lumia 935, a handset that runs said OS. 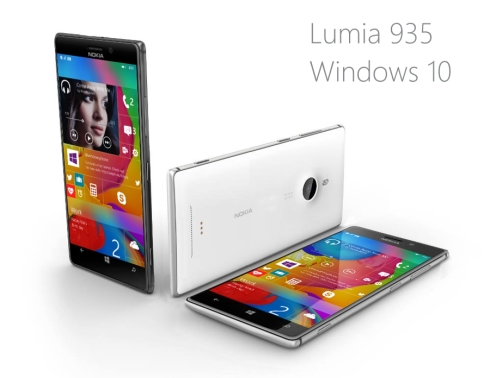 The Nokia Lumia 935 Windows 10 smartphone was rendered by Ibrahim Sujau and it features a 5.5 inch display with a 2560 x 1440 pixel resolution, a 20 megapixel camera and 64 GB of storage. There’s a microSD card slot on board, 2 GB of RAM and aluminum used as the construction material. The design is all Fabula here, with a back side that reminds me of the Lumia 930 and the Lumia 925 a bit.

There speaker is now bigger and we’ve got 3 pins for the charging cradle also at the back. I can’t tell if the Windows Phone buttons are virtual or capacitive, but I’m leaning towards the latter. The sides of the phone seem to be made of metal, while the back is probably polycarbonate. The screen looks mighty crisp and Windows 10 has taken transparency to a new level.

About Kelvin
Passionate about design, especially smartphones, gadgets and tablets. Blogging on this site since 2008 and discovering prototypes and trends before bigshot companies sometimes
HTC e:voluti:on is Funky, Unusual, Interesting   LG Chocolate is Back, in a David Quijada Render