One of our readers, DJArmani sent us an email requiring us to create a Nokia Lumia concept phone that slightly resembles the Lumia 920 and adopts a list of specs that he request. Designer Rahul Sharma from India was kind enough to turn the request into a real concept and the result can be seen below. Meet the Nokia Lumia 950 Atlantis, a 4.8 inch smartphone. 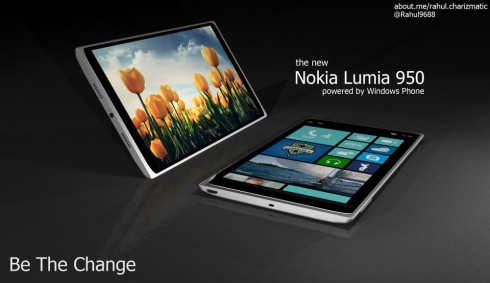 We’re dealing with a phone that arrives with the tagline “Be the change” and it offers a single unbibody design, engineered with titanium steel. Upfront we’ve got a 4.8 inch Puremotion display, Windows Phone 8 as the OS and a 2 GHz quad core Snapdragon CPU with Adreno 320 GPU inside. 2 GB of LPDDR3 RAM are also included, as well as dual Dolby surround speakers for a more immersive experience. At the back we’ve got a 16 megapixel Pureview camera with a 3 point Xenon LED flash.

There’s also a removable 3100 mAh battery on board and aside from the request Rahul Sharma added a metallic triangular kickstand at the back. This is a magnetic detachable kickstand, created so it won’t stick to the phone at all times, in order not to look weird. There’s also a dedicated camera key on board and dual 2 megapixel cameras at the front. NFC, facial recognition, gesture tracking and up to 128 GB of extra microSD storage are features also included by Rahul Sharma.

He also performed slight tweaks of the design of the Lumia 920, like the curves at the bottom, while keeping the main idea intact. Fancy it? We sure do! As usual we advise you to send us your ideal design and our designer friends will make them real.