When you think about a gaming phone, either the PSP Phone pops up or the occasional Xbox handset concept. The latter is also the case today, through the Nokia Lumia Play render, done by Antonio Celestino. Describing this as an “Xbox Phone” is not at all far from the truth, since we’re dealing with a smartphone that’s also a pretty powerful console. 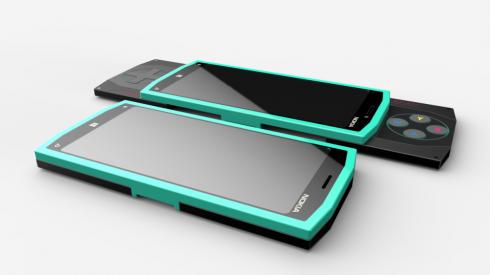 Nokia Lumia Play features two game pads at the back of the phone and they can extend out and be used as such, improving the gaming experience. It is also possible to use the device as a gamepad when interacting with an Xbox 360 console. The device features a high definition 1136 x 640 pixel display, a touchscreen with Gorilla Glass protection. There’s also a 5 megapixel front camera capable of 720p videos, while at the back there’s a 10 megapixel camera with Full HD video capture.

This Nokia concept phone runs Windows Phone 8 and measures 7.6 mm in thickness. Lumia Play offers both a directional pad and action buttons, plus there should be some minor shoulder buttons available, although I’m not so sure. The handset has a pretty unusual shape, seen from the front with lots of straight edges and straight lines, so without curves. No specs were mentioned, but a quad core CPU and 2 GB of RAM would be welcome. Is such a phone possible?