Since even Apple is rumored to be preparing an iWatch and Samsung is apparently up to something like that as well, Nokia may also jump on the bandwagon and come up with a Lumia Watch. Till then we have a concept of such a watch from Mohammad Mahdi Azimi. 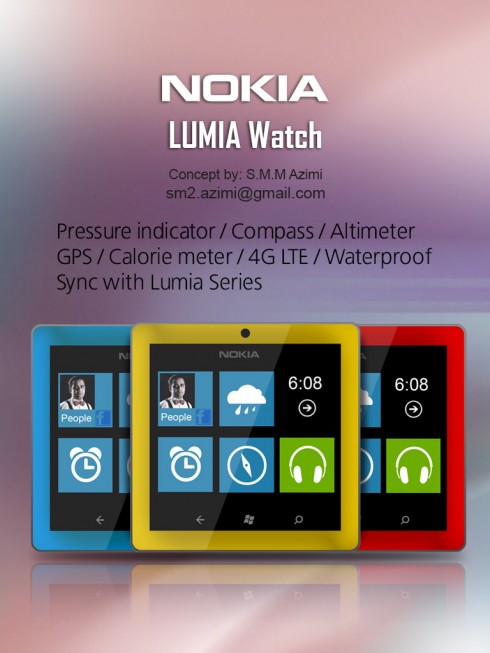 The device minimizes the design of the typical Lumia and it’s the basic square wrist accessory with touchscreen included. The Nokia Lumia Watch packs a pressure indicator, compass, altimeter, GPS, calorie meter, 4G LTE and a waterproof case. There’s also the ability to sync the device with Lumia series handsets.  From what I see this watch runs some version of Windows Phone, too.

The watch seems to have a front camera and it comes in the bright colors of the Lumia series. It’s not very clear what the belt of the concept watch looks like, but I suppose that it’s either metal or leather, or maybe a human-friendly plastic that doesn’t harm you. It sounds like a good idea and I seem to have spotted a microSD card slot on it or maybe a SIM card slot?