Deepak Ahuja sent us a brand new Nokia concept phone, with Android 4.2 Jelly Bean on board. The device is called Nokia Nexus G and it apparently also supports “Android 4.3”, whatever he means by that. The device packs a 5 inch Super AMOLED HD+ display with Corning Gorilla Glass 3. 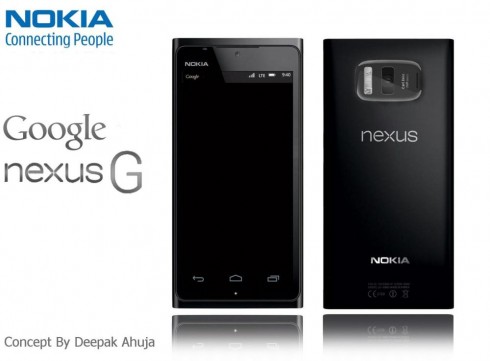 This Nokia Android phone’s resolution is 1092 x 1320 pixels with 441 ppi density and 16 million colors. The same device has a 2 GHz quad core processor, a 21 megapixel Pureview camera with Xenon flash and a front 4.5 megapixel camera with BSI and CMOS. Other features include 64/128 GB of storage, so there’s no microSD card slot, because there’s enough memory. And speaking of which, there’s also 4 GB of RAM, enough for any kind of needs.

Nokia Nexus G uses a 4.050 mAh battery, a 3.5 mm audio jack and Purity (By Monster Audio) sound enhancement. The back of the smartphone is a soft touch one, that reminds me of the texture of the HTC 8X, at first glance. The phone also seems to have LTE connectivity and virtual Android buttons on the screen. Is this doable?