How about a concept interface for a change? What you can see below is the creation of Peter, a Nokia fan quoted by Mynokiablog.com. Well, he made a custom version of Windows Phone 7 for Nokia devices, keeping the basics of the Metro UI, but adding that tiny extra that missed – another dimension.

The Live Tiles have become Live Cubes, with 4 equatorial sides to go through, each with an option of the main Tile available. Peter also envisions Secondary Tiles, that display additional content from the Master Cube and occupy two squares instead of one, or maybe even more, as shown in the image below. There’s an arrow pointing out towards those extra details of the main tile. 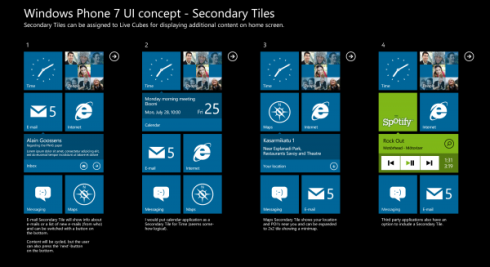 And finally, something I thought was really ingenious: a long press on a Live Cube turns the other cubes around it into additional features for the one you pressed. For example, holding the Internet Explorer Mobile pressed reveals cubes around it with bookmarks, pages you visited and other such options. The same probably goes for Zune and your playlists.

This doesn’t change the Metro UI look, but its functionality, so it’s brilliant. 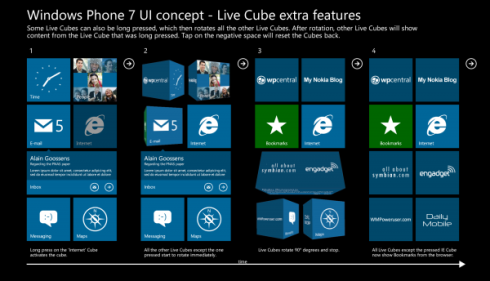 About Thrystan
Transducer Mobile Phone Concept Translates Instantly What the Caller Is Saying   Flex Mobile, a Flexible Phone That Becomes a Bracelet, Some Other Wearable Piece of Gear